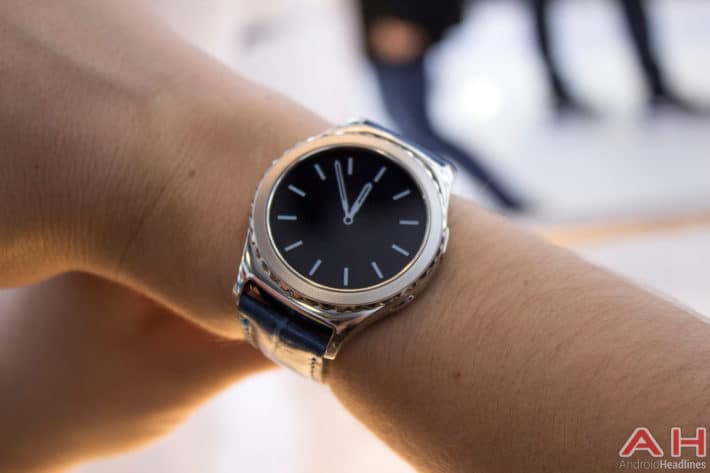 When Samsung announced the Gear S2 towards the end of last year, they clearly had something of a hot wearable on their hands. Since the launch of the original Gear S2, Samsung have gone on to offer cellular versions of the device, capable of making calls and connecting to the web on their own, without being tethered to a smartphone via Bluetooth. On AT&T users can even use their existing number to make calls from their wrist using a Gear S2 and AT&T's cellular network. Now though, Samsung is announcing a version of the Gear S2 Class (the more traditional-looking version of the smartwatch) that features a programmable e-SIM, and has become the first to do so.

The e-SIM inside of the Gear S2 is totally GSMA-compliant and Samsung notes that they also worked with a number of different wireless operators all over the world to ensure that their implementation was up to snuff. For those that are unsure of what this new type of SIM card is, we'll give you a little reminder, the 'e' of e-SIM stands for embedded, meaning that the card doesn't need to be removed and could be soldered on to the board. This has its advantages not only in the overall size of the SIM card, but also cutting down on costs and presumably creating better-built devices without needing to offer ports or openings to get access to the SIM card slot. These e-SIMs will be rewritable by all carriers and networks across the globe, which will ensure that users with an e-SIM device can still change or edit information found on the cards, despite them having been embedded in their devices.

The use of e-SIMs in devices will further automate the process of updating carrier information and the new tech also has big meanings for IoT implementations as well. These new small chips will allow IoT devices to connect to a much wider network than just a home's WiFi network, without the need for a user to insert and keep track of multiple different SIMs and such. For now though, it appears as though the e-SIM inside of the Gear S2 classic will be used to make a connected wearable that can stand on its two feet a little thinner and more manageable.