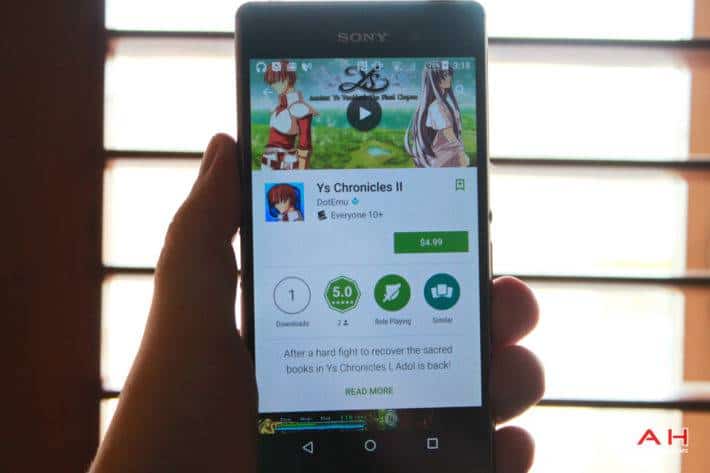 RPG games aren't for everyone, but they certainly are well-liked by a fairly large amount of gamers. Whether it's the captivating stories that immerse you in a whole different world other than your own, the relatable characters, the graphics, the depth and complexity of the gameplay, a combination of those things, or all of the above, RPG games offer a lot to consume and often give you plenty of hours of gameplay. While famed Final Fantasy IX just launched earlier this morning at $17 from publisher Square Enix, those who love RPG's and wanted something a little less costly for a mobile title can now go for Ys Chronicles II that just landed on the Play Store today as well.

Costing only $4.99, Ys Chronicles II is likely to bring back some memories for retro RPG fans, and especially for those who may have already invested time and money into the original Ys Chronicles that has already been released by DotEmu for some time now. Just like the first game in the series, Ys Chronicles II is a JRPG style of game meaning the combat is turn-based. It features the same style of visuals as the first title as well, although they have been touched up just a bit.

This port also features many enhancements to the original game like HD menus, multiple soundtrack options including Chronicles, original, and PC-88, and a hint system that's been put in place to help newcomers who may be unfamiliar with either JRPG's or just those in the Ys series. The game also features four different difficulty levels so no matter the level of experience you have you can enjoy the game at your own pace. In addition to multiple difficulty levels, the game can also be played in two different modes which include Time Attack and Adventure, with the latter being geared towards a story driven style of play. If adventure mode is your thing, there are also two different graphics modes you can apply which include Chronicles and Original. If you like RPG games and you aren't ready to plunk down what Square Enix is asking for Final Fantasy IX, consider Ys Chronicles II at less than half the cost.