Mobile World Congress is just a few weeks away now, and as Samsung have confirmed their plans for the Sunday just before the show opens (February the 21st) it seems all but confirmed that Samsung will be introducing the new Galaxy S7. Few smartphones generate as much hype and anticipation as the Galaxy S line of products, no small wonder considering the firm goes toe-to-toe with Apple and rules the Android roost. The new Galaxy S7 has been featured in rumors and leaks for some time now, and just yesterday Samsung let the cat out of the bag regarding the “Edge” variant of the Galaxy S7, and now they’ve essentially confirmed the device – and possibly the Galaxy S6 line – will be guaranteed an update to Android N, whatever that ends up being.

In a developer listing, hosted by Samsung themselves, the South Korean giant listed some intriguing features an Edge-display can offer developers, and it mentioned a “Galaxy S7 edge” as being compatible with them. Taking a closer look at these developer listings and we can see that “Android N” is mentioned a number of times in relation to some features being taken out of Samsung’s TouchWiz software. The mention of “N” as it’s simply noted in the below image refers to the Edge Immersive Mode, AirButton, SmartClip and WritingBuddy features. These are all set to be deprecated in Android N, which could also suggest that Samsung is working on some new, perhaps more useful features for the Edge display in new Galaxy S and Galaxy Note products.

Considering that the only devices to feature an Edge display, therefore many of the aforementioned features were released in the past 18 months or so, one could take this mention of “N” to mean that Samsung has plans to keep the Galaxy S6 line updated beyond 2016. Of course, we’d expect as much for a device only just launched last year, but it’s always nice to get some sort of inkling either way, even if it’s as vague as these mentions here. No matter what, the Galaxy S7 is going to be a big launch for Samsung, and by extension Android itself, and we’ll be there to bring you all the news as we have it. 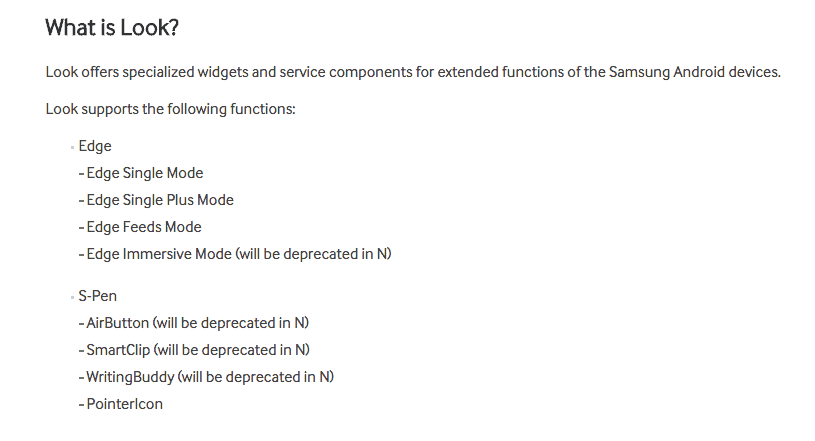