On a monthly basis, the team behind Android release figures which look to provide a greater level of insight to how the Android operating system is currently divided. This is the Android distribution figures and last month saw Android 6.0 (Marshmallow) climbing up from 0.5-percent to 0.7-percent. While the other most recent version of Android, 5.0 (Lollipop) also climbed to 32-percent. Following on from those figures and today, the most recent Android distribution data has now been released. For reference, these figures are relative to the seven-day period leading up to and ending on February 1st.

In terms of the latest figures, the newest version of Android, 6.0 (Marshmallow) has now since its adoption level pass the 1-percent figure for the first time, with the current figure coming in at 1.2-percent. This is up from the previous month in which Marshmallow had climbed to 0.7-percent. Moving on and Android 5.0 (Lollipop) now sees its distribution figure coming in at 34.1-percent. Again, this is an increase from the previous month in which Lollipop had established a 32.6-percent level of distribution. In terms of the more finer details, this equated to a 17-percent distribution for Android 5.0 specifically and an almost identical 17.1-percent level of distribution for Android 5.1.

Moving further back and Android 4.4 (KitKat) remains the most widely adopted version of Android with its latest figure coming in at 35.5-percent. Although, this is a decrease from the previous 36.1-percent level noted last month. Android 4.1.x – 4.3 (Jelly Bean) now sees its distribution coming in at 23.9-percent. This again, marks a decrease from last month's 24.7-percent level. In terms of the breakdown, Android 4.1.x occupied 8.8-percent, Android 4.2.x came in at 11.7-percent and Android 4.3 was the lowest of the three with only 3.4-percent distribution. Moving further back and Android 4.0.3 – 4.0.4 (Ice Cream Sandwich) now sees its distribution level drop from 2.7-percent down to 2.5-percent, while Android 2.3.3 – 2.3.7 (Gingerbread) also dropped from 3-percent down to 2.7-percent. Interestingly, Android 2.2 (Froyo) also saw a decrease this month, down from 0.2-percent to 0.1-percent. The reason this is somewhat interesting is that Froyo had been stable on 0.2-percent since about August of last year when it dropped down from 0.3-percent. 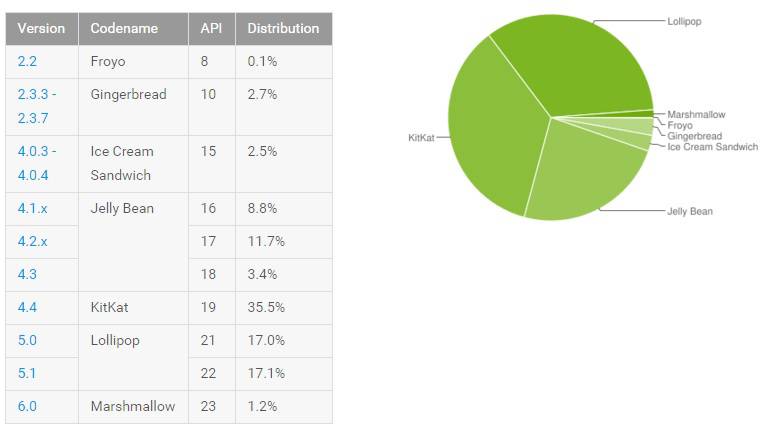 Advertisement
Trusted By Millions
Independent, Expert Android News You Can Trust, Since 2010
Publishing More Android Than Anyone Else
41
Today
79
This Week
546
This Month
1221
This Year
111335
All Time
Advertisement