Huawei has introduced quite a few compelling devices last year, and the Honor 7 is certainly one of them. The Honor 7 might not be the highest-end devices Huawei has introduced in 2015, but it certainly is quite compelling. This mid-ranger has been introduced back in July, and it has been selling really well for Honor, Huawei’s subsidiary. That being said, Honor released a statement on February 15th which claimed that the Android 6.0 Marshmallow update will land on the Honor 7 within 2 weeks, and that’s exactly what happened now, read on.

The company has announced that they’ve started rolling out Android 6.0 Marshmallow for Honor 7 units in India. The beta version rollout has commenced back in December in the country, and the final version is finally ready. OTA rollout has started, and if you didn’t get it yet, you will soon, keep in mind that this is a staged rollout. This update will not only bring Android 6.0 Marshmallow on your device, but also EMUI 4.0 (Huawei’s UI), which is installed on top of Google’s OS. Now, as far as the changelog goes, there are quite a few improvements compared to the previous variant of EMUI. As far as the camera goes, EMUI 4.0 brings ‘Professional Mode’, which will bring various new features with it. A number of new filters have been added to the gallery, and same can be said for gallery features. The ‘Smart Group’ function has been added to ‘Contacts’, and you now have 4 seconds to cancel the SMS you sent, if you change your mind, of course. Screen recording functions has been added on a system level in EMUI 4.0, and there are tons of additional improvements throughout the system which you can check out in the full changelog (image down below).

The Huawei Honor 7 features a 5.2-inch fullHD (1920 x 1080) display, 3GB of RAM and either 16 or 64GB of expandable internal storage. This phone is fueled by the Kirin 935 SoC, and a 3,100mAh non-removable battery is available on the inside. The 20-megapixel snapper can be found on the back of this device, and an 8-megapixel shooter is available up front. Android 5.0 Lollipop comes pre-installed here out of the box, and there are two SIM card slots available on the inside of the Honor 7. The phone measures 143.2 x 71.9 x 8.5mm, while it weighs 157 grams. It is also worth mentioning that Honor 4C, Honor 6 and Honor 6 Plus are expected to receive this update soon as well. 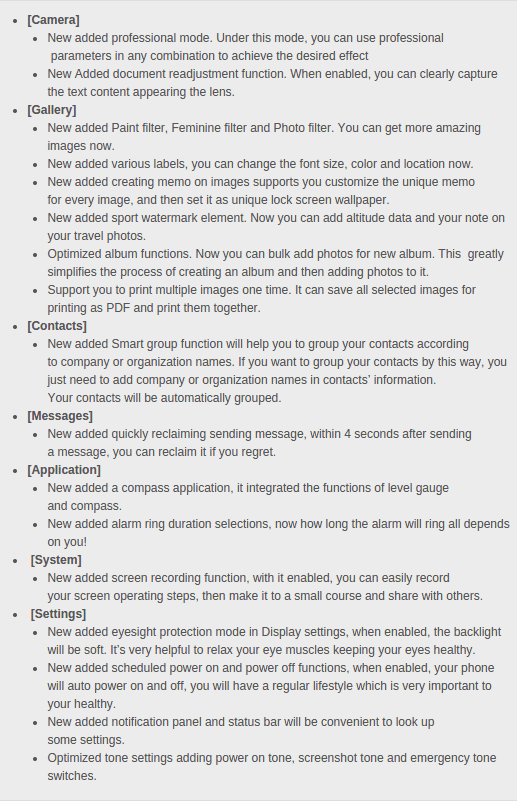