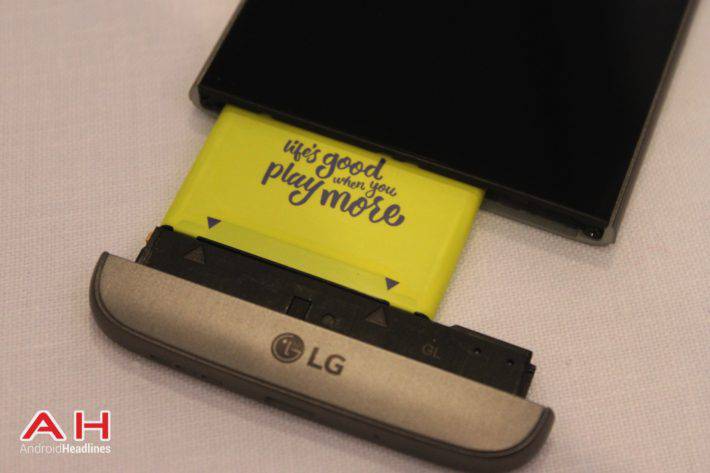 No matter how great all of these new smartphones for 2016 are, there's one big sticking point that users are unwilling to compromise on; battery life. For as long as the smartphone has been around, charging our devices every evening has always been something we've had to deal with and even though some devices such as the Sony Xperia Z line last for two-days or so, not much has changed. We have very definite expectations of a smartphone's battery these days though, and we expect it to get us through the day and well into the evening at least. This is an area where LG have often done well in, but with a smaller 2,800 mAh battery inside their newly-announced LG G5, have the South Korean firm gone even further backwards?

As you can see from the image above, the LG G5 has an important party trick up its sleeve; a removable battery. This is because despite the new metal unibody design, the button plate of the G5 comes away to swap in a new battery or use Magic Slot expansions for a better camera experience or a better overall sound. LG is calling the overall design of the G5 a "modular type" design, and they were keen to let people know that the LG G5 doesn't sacrifice on either design or convenience. We had previously heard that the G5 would sport a smaller 2,800 mAh battery and today it was confirmed. There's a lot going on inside of the G5, that's for sure, but with a smaller 5.3-inch display there's less to push and the always-on display uses just 0.8% of power when in use. The company was curiously quiet about how long the G5 would last in between charges, but they did detail the Qualcomm Quick Charge 3.0 capabilities of the device. Which will help to charge the G5 27% faster than the Quick Charge 2.0 technology inside of last year's G4.

Of course, the key point that LG wants to get across here is that the battery inside of the G5 can not only be replaced, but extended when doing anything intensive, like using the camera. The LG CAM Plus Magic Slot add-on will allow people to get a further 1,100 mAh capacity inside of the device. There doesn't seem to be an official larger battery pack here however, but there's a possibility aftermarket options will become available during launch.