Xiaomi has, much like Samsung and LG, introduced their new flagship during the Mobile World Congress (MWC) in Barcelona last week. The company has announced the long awaited Mi 5 smartphone last Wednesday, and the registrations for the first flash sale opened up soon after the announcement. We were expecting Xiaomi’s all-new flagship to be in high-demand, but the numbers that the company shared with the public are out of this world, read on.

Over 14 million people have pre-registered for the Xiaomi Mi 5 flash sale thus far. So, in less than 5 days 14.4 million people decided to pre-register for the Mi 5 flash sale which will be held on March 1st. Now. this is, needless to say, Xiaomi’s new record, not a single device this company has introduced comes close to these numbers. The company has managed to sell 70 million smartphones last year, which was their new record, but they still missed the 80-million goal set earlier in 2015. Well, judging by the response from the public, Xiaomi Mi 5 would definitely improve those numbers if it were announced last year. Now, for those of you who don’t know, Xiaomi hasn’t introduced the ‘Xiaomi Mi X’ flagship last year, the Mi 4 was announced back in 2014. The company did introduce the Mi Note and Mi Note Pro back in January last year, but not the Mi 4′ successor. Xiaomi’s consumers had to wait more than 18 months for the company to introduce their new flagship smartphone, and that certainly had something to do with these crazy pre-registration numbers Xiaomi is reporting. We still don’t know how many units will Xiaomi make available for the March 1st flash sale, but it seems like tons of people are interested in grabbing one. Keep in mind that only the white version of the device will be available for sale tomorrow, we still don’t know when will Xiaomi make the Black or Exclusive Ceramic Edition available to consumers.

The Xiaomi Mi 5 features a 5.15-inch 1080p display, while it ships with either 3GB or 4GB of RAM. The 3GB RAM model is available with either 32GB or 64GB of internal storage, while the 4GB RAM variant ships with 128GB of native storage and is called Xiaomi Mi 5 Pro aka Exclusive Ceramic variant. This smartphone is fueled by the Snapdragon 820 64-bit quad-core processor, and a 16-megapixel 4-axis OIS shooter is placed on the back of the device. Android 6.0 Marshmallow comes pre-installed on this smartphone, and on top of it, you’ll find Xiaomi’s MIUI 7 OS. Click here if you’d like to take a look at Xiaomi Mi 5’s full spec sheet. 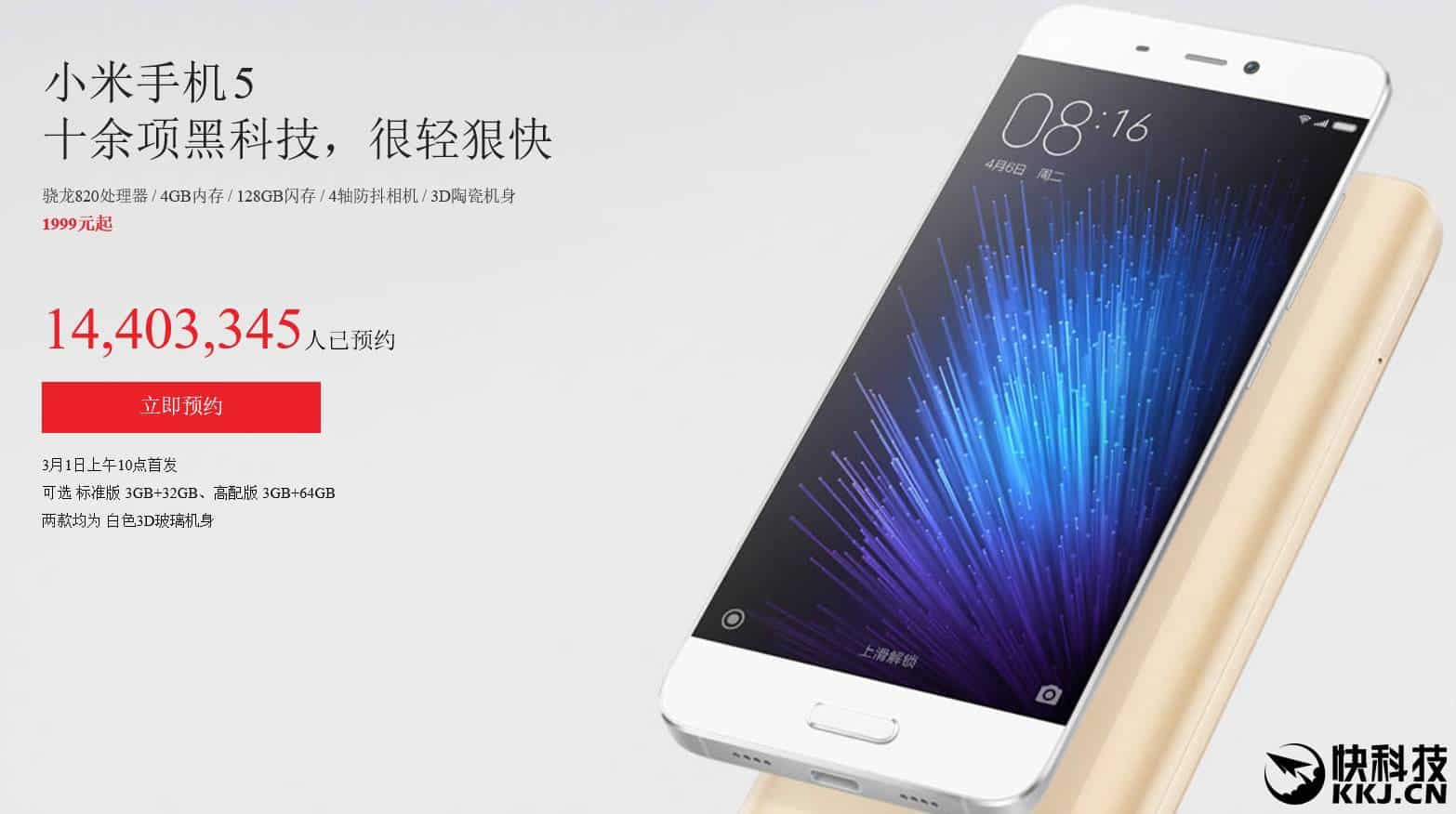