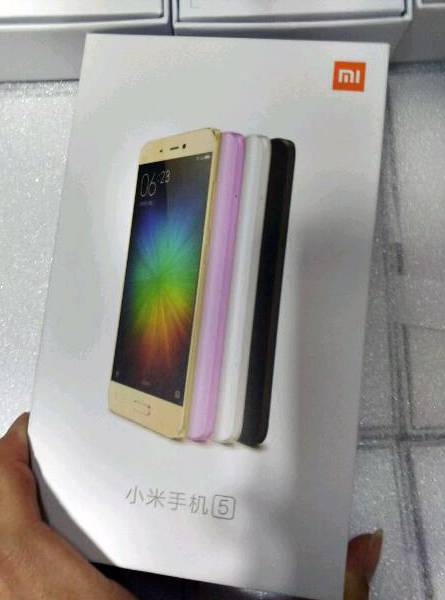 Xiaomi Mi 5 has been leaking like crazy recently. We've seen the alleged device in various images, both renders and real life shots. On top of all that, Xiaomi has confirmed not only that they'll hold an event in Beijing on February 24th, but also in Barcelona during the Mobile World Congress (MWC) on that very same date. These are exciting news, especially for those of you who are hoping Xiaomi will start selling their devices officially in the US and Europe, this might be a sign of some sort.

That being said, we have a new leak to share with you. If you take a look at the images in the gallery down below, you'll get to see what seems to be the Mi 5's retail packaging. On the box itself, there's the device itself, and you get to see four different colors of the phone, Gold, Pink, White and Black. This is the very same design we've seen a number of times recently, and all things considered, this might actually be the final design of Xiaomi's new flagship. The physical button will be placed below the display, which is a bit odd for a Xiaomi-branded smartphone, but it seems like it's going to happen. The fingerprint scanner will quite probably be included on the inside, but we're still not sure.

As far as specs go, Xiaomi's exec has already confirmed that the Mi 5 will be fueled by the Snapdragon 820 SoC, and that's pretty much the only spec confirmation we were able to get. The Mi 5 will, according to rumors, feature a 5.2-inch 1080p or QHD display, depending on the model, and it will arrive in both all-metal and metal + glass variants. The device will ship with either 3 or 4GB of RM, and a 16-megapixel camera is said to be located on its back. The 3,600mAh battery has also been mentioned in various leaks, and Android 6.0 Marshmallow will quite probably come pre-installed on this phone, along with Xiaomi's MIUI 7 OS. That is pretty much it, all we can do at this point is wait for Xiaomi to officially announce this smartphone, though we're sure that the additional info will surface before that happens, we're still almost a month away from the announcement.