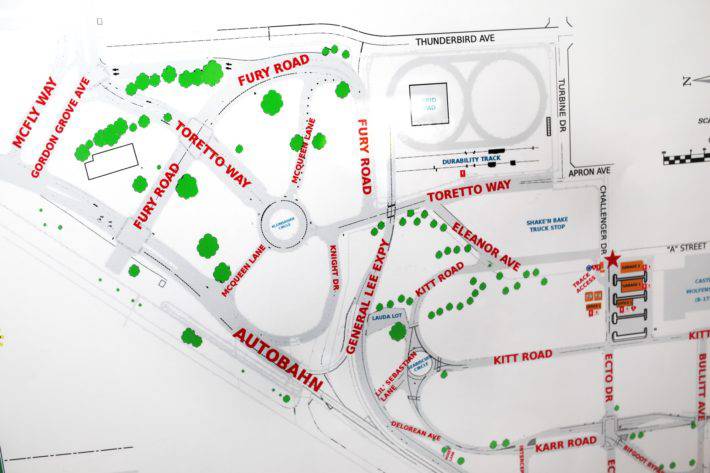 How would you like to drive on Fury Road? Or maybe take a spin up McFly Road, then hop on the Autobahn to get to scenic DeLorean Avenue? From there, you can take Karr Road to Ecto Drive or u-turn and hit Kitt Road. If you're reading this, chances are pretty good that you won't get to. Self-driving car testers at the former Castle Air Force Base in Atwater, Califronia get to do it, though. The old base, named after a fallen pilot, was converted into a miniature city of sorts, reminiscent of Samsung's test track, but "city planning" got a bit creative with the street naming.

The 2,000 acre base was decommissioned after the Cold War and, for the most part, was used for whatever random commercial purposes lessees could come up with. Google went ahead and snapped up a portion of the facility, now roughly 100 acres, to test their robot vehicles. The 100 acre stretch boasts features like a rain simulator, working traffic light, traffic circle, slips and T-stops. Medium writer Steven Levy got a chance to check out the facility and give a self-driving prototype a spin, something that usually requires an application, interview and a four-week course. What it does not involve, however, is a permanent job at Google, in most cases, or a special license. Applicants are tested, interviewed and given a test drive, then they simply complete the four-week intensive course and they're good to go. The course itself mostly consists of learning about the self-driving cars' different parts, how they could mess up, other things that could go wrong, how to tell something's gone wrong and what to do. Drivers must keep their hands and feet in driving position at all times, rather than eating, drinking, smoking or anything of that sort. Levy described it as tedious and boring after the newness faded. He asked of the process, "Can we order some spice?"

Levy came back to the world of the living with a map of the self-driving car test facility showing the careful, calculated and highly intelligent effort it took to get the streets lined up and fittingly named. The highway at the southern reaches, known as the Autobahn, leads to Fury Road, a hub that can take you to Toretto Way or McQueen lane. The Autobahn could also take you to the General Lee Expressway or Karr Road, which leads to Kitt Road. Up along the far north reaches of the facility, you'll find a small side road called Thunderbird Avenue that runs from Turbine Drive in the east back to a dead end in the west, with two connections to Fury Road. From McQueen lane, you can also circle back onto Knight Road to head back to the Autobahn, if you figure out you've taken the wrong exit. Of course, the goal isn't for you to be doing all these things, it's for you to be in a self-driving car that's doing all these things.