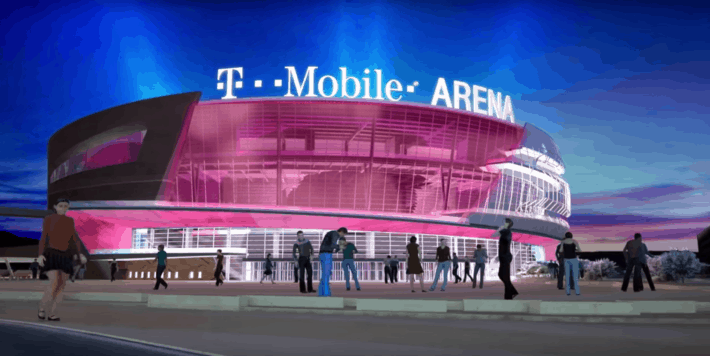 CES is in full motion at the moment, and we're seeing a lot of new tech being announced at the tradeshow. Various tech companies from all around the world are participating this year's CES, and the news just keep on coming. Well, T-Mobile has actually decided to join the party and announce something big as well. The company has released an official announcement for the T-Mobile Arena in Las Vegas, read on.

T-Mobile, along with AEG and MGM Resorts International, announced the T-Mobile Arena in Las Vegas. This arena is located west of the Las Vegas Strip, and will be used for various live events, ranging from music to sporting events. The T-Mobile Arena offers a 20,000-seat capacity, and T-Mobile said that they intend to host various events in order to cater to everyone basically. You'll be able to see boxing and UFC matches, hockey, basketball, music concerts, etc. "We're going to light up Las Vegas in magenta and give everyone who visits T-Mobile Arena a chance to experience what it means to be Un-carrier! T-Mobile Arena will have the biggest shows in a town known for big shows and T-Mobile customers will always be treated like VIPs with priority access and exclusive benefits," said Mike Sievert, the Chief Operating Officer of T-Mobile.

The company has said that T-Mobile customers will get various benefits, including a dedicated fast-track VIP venue entrance for basically every event. When tickets go on sale, T-Mobile customers will have access to tickets and premium VIP experiences reserved exclusively for them, which include pre-sales and seat upgrade options. T-Mobile has also mentioned that they've already agreed to host some events at the Arena, including the Opening Night starring The Killers on April 6, UFC 200 in July, George Strait, Harlem Globetrotters, Janet Jackson, Dixie Chicks and more. T-Mobile Arena will have a limited number of exclusive Founding Partners, said T-Mobile, including Coca-Cola, Toshiba American Business Solutions Inc., Cox Business and Schneider Electric. If you take a look at the embedded video down below, you'll get to see T-Mobile's promo video for the T-Mobile Arena, which reveals the looks of the Arena from both inside and outside.