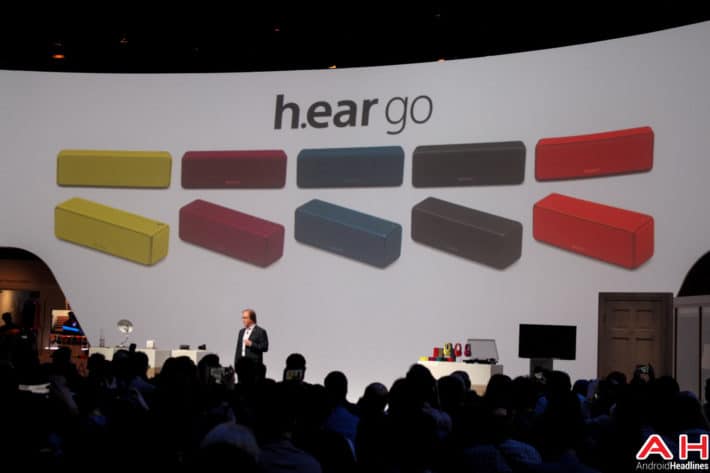 Today, Sony announced at CES a slew of products, across their TV, Audio and Camera businesses. In their audio business, they announced the new Walkman A26, which is available in a ton of colors. But they also announced some new wireless speakers. And one of the more important features to this line of wireless speakers, is perhaps the Google Cast support. Allowing you to stream music to these speakers over WiFi, instead of Bluetooth. Which should bring you some high definition sound, and allows you to control it from your smartphone or tablet, or even your laptop.

Sony is expanding their Extra Bass line here, and announced the SRS-XB2, SRS-XB3, and the GTK-XB7. Both the SRS-XB2 and SRS-XB3 are shaped like the Beats Pill speakers, and include HiFi Audio, as well as NFC for pairing to your smartphone or tablet. The SRS-XB3 also includes a USB port, which allows you to charge your phone while streaming music or audio to the speaker. The GTK-XB7, is more of a boombox type speaker. It's a larger speaker, which basically means it is built for being used outdoors or at parties, so it can fill the entire room with music. Like the other two speakers, this also has NFC for pairing your smartphone or tablet.

There's also the SRS-ZR7, which is a high-end speaker from Sony. And this one is meant to compete with the likes of Sonos. We have HiFi audio support here, as well as streaming over Spotify Connect and Google Cast. Sony allows you to use this in multiple rooms, in which you can control these speakers using the Sony SongPal application. There is also the SRS-ZR5 which is a slightly smaller speaker and is able to be paired with the SRS-ZR7 for even better stereo sound. There is also the h.ear.go, which is the smallest speaker to ever have HiFi audio, at least according to Sony. It's available in a slew of colors, and is also touting about 12 hours of continuous playback.

As far as availability goes, Sony is quoting "Spring 2016", so they should be available in a few short months. However, Sony has not mentioned any prices for these speakers just yet. We should hear more about prices when they are available in the Spring.