Cameras in smartphones have been getting better over time, most flagship phones and even mid-range phones are capable of taking pictures in good quality nowadays. There are a lot of aspects that intervene in a good picture, and it depends on several hardware components such as the camera sensor, the lens, and so on, software is also very important, as it is used to process what’s captured by the hardware and fixing the colors or illuminating some dark objects. Sony has some experience building camera sensors, in fact, the ones included in their Xperia Z5 lineup feature extremely short autofocus times. Software seems to be equally important to Sony, despite some might argue that this is what causes Xperia phones to take only average pictures, the company has released some experimental software so developers could take advantage of their cameras and their technology.

That’s not to say that software on Sony’s camera app is not good, it features simplistic looks with only a few buttons for basic settings. There are also several camera modes like Superior Auto, Manual, Face in picture, Sound Photo, 4K Video and many more, plus there are several more which can be downloaded. Some of them allow more controls to be tweaked and some others add fun effects. Sony has included a mode with augmented reality (AR) effects, which work fairly well. This software is able to recognize faces and surfaces and integrates digitally-created animated objects to them using Sony’s SmartAR Engine. Some of the themes in AR mode include a Jurassic jungle, a magical forest, the ocean, a masquerade party, comics, animals, among others.

Now, Sony has released the Birthday AR Effect, so users can take pictures of their special day with decorations such as balloons, signs and cakes. People can be seen wearing virtual hats, glasses, bunny ears and other fun props. It works on photos and videos and users can even switch to the front-facing camera to take a selfie with this effect. Users can interact with the displayed objects by tapping on them to change them or drag them to change their position. This effect requires the AR Effect app version 3.4.XX or higher and Android 4.3 or a more recent version. The Birthday effect can be downloaded from the Play Store. 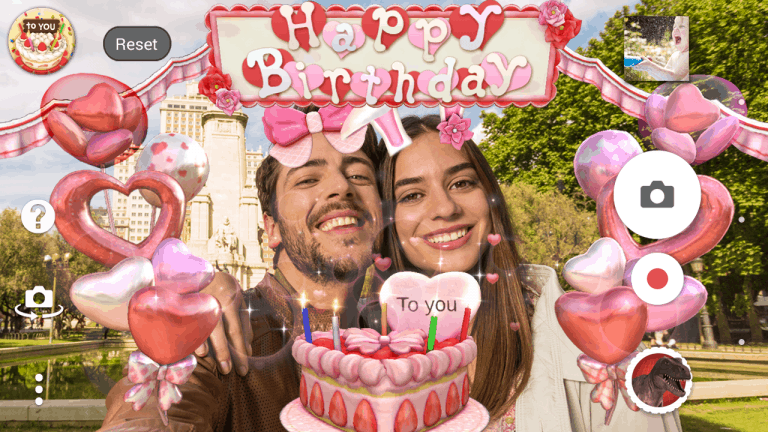