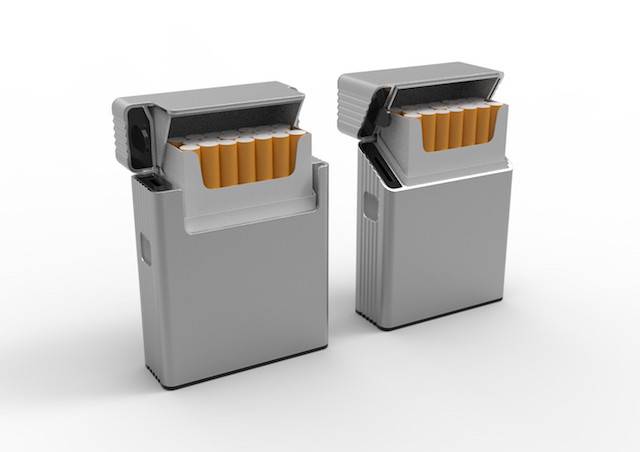 Is there anything that Bluetooth can't help us with? At this point, we're guessing the answer has to be 'no'. With wrist-worn trackers leveraging the processing power of our smartphones through Bluetooth, and the Low Energy version increasing battery life, Bluetooth has become as revolutionary as WiFi was in the early 2000's. CES 2016 might be held in Las Vegas every year, but a French firm is announcing an intriguing little gadget for smokers that just can't kick their habit. The Smoking-Stopper from RegulSmoke is a Bluetooth-enabled cigarette case that wants to control when people can have a smoke.

The idea is pretty simple really, users place a standard size pack of cigarettes into the metal casing and then sync it up with their smartphone. It then feeds back information to the smartphone app as to when and how often you open it up, presumably to have a smoke. The app side of the equation then starts to ween users off of the death sticks by refusing to open outside of pre-defined times of day. The app can recognize 62 different profiles of smoker, and it's said that the psychological device of only letting people smoke when the app says so can help change their attitude to smoking. It's a neat idea, but one that has its flaws. For instance, smoking in public places has become increasingly difficult, with laws all over the world making it harder to light up. This has caused a lot of people to simply move over to e-cigarettes and vaping to get their nicotine fix.

The Smoking-Stopper was developed with the help of Tobacco Treatment Specialists and should users need further advice and hand-holding, the app can connect them with specialists. Cutting down is of course the first step to being able to stop, but with so many other products already on the market proven to have helped people stop and the difficulty of smoking a traditional cigarette in public could make the Smoking-Stopper a tough sell. Speaking of cost, neither pricing or firm availability has been announced, but it's said to be launching some time this year.