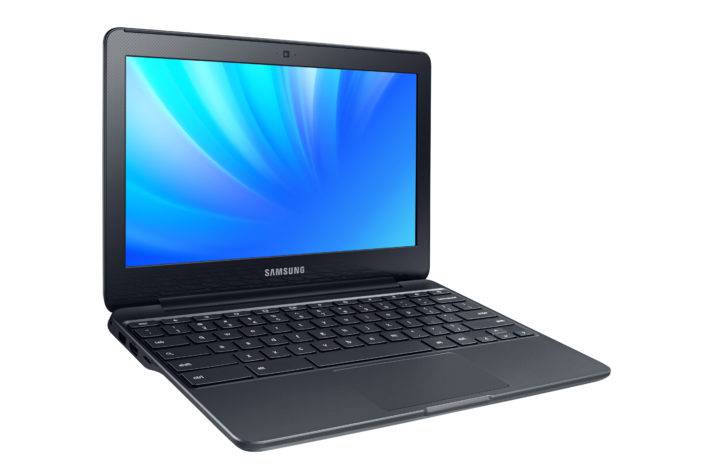 The North American Chromebook market is an exciting place to be at the moment as the platform has taken off in a big way, driven by sales to the education sector. We've seen how in under a year, around half of computers sold to schools and other education establishments are Chromebooks. Chromebooks are typically an inexpensive computer based around a lower level Intel or ARM processor, 2 or 4 GB of RAM, 16 GB of local storage and a relatively low resolution display, but backed up by Google's cloud computing services. The platform is almost maintenance free and new models come with at least five years of support from Google to keep the Chrome browser updated to the latest version. As such, their price ranges from a couple of hundred dollars upwards and for many users' lightweight computing needs.

Samsung produced one of the first commercially successful Chromebook models in the shape of the Chromebook Series 3, which was based around a dual core ARM Cortex-A15 Exynos chipset. This was later followed by the Samsung Chromebook 2, which was originally powered by a Samsung Exynos chipset but Samsung added an Intel variant later. One of the criticisms of Samsung's ARM-based Chromebook models is that they are not as powerful or responsive as the Intel-powered competition but conferred no advantage when it came to battery life – indeed, many Intel-powered competitor Chromebooks offered better battery life. This week, at the Consumer Electronics Show, Samsung have surprised us by releasing a new generation Chromebook (the Chromebook 3), which is based around a dual core Intel Celeron processor.

In terms of specification, the new Chromebook 3 uses an 11.6-inch, 1,366 by 768 pixel display (the standard for many Chromebook models). There's an Intel Celeron N3050 processor backed up by Intel's HD graphics and either 2 GB or 4 GB of RAM. Samsung have given the model 16 GB of local storage and a 33Wh hour battery, which gives up to a claimed eleven hour battery life. Connectivity comes in the shape of 802.11ac Wi-Fi plus Bluetooth 4.0, there are stereo speakers, a 720p resolution web camera and a MicroSD card slot. The chassis is described as having a "metal reinforced body," but it is somewhat thick for a Samsung laptop at 0.7 inches.

Samsung are billing the new Chromebook 3 as "the ideal laptop for consumers, businesses and schools that need a highly portable experience without breaking their budget." Gary Riding, Senior Vice President of Samsung Electronics America, said: "We're seeing more and more people flocking to Chromebooks as families, students and other consumers seek out easy-to-use, highly portable and affordable laptops as resources for personal use, education and even work. Samsung recognized that demand when we launched the first-ever Chromebook in 2011. We're continuing to keep up with evolving consumer needs with this new iteration, which offers even more convenient features that solve consumers' pain points, like all day battery life and fast charging capabilities." Unfortunately, other than explaining that the new Chromebook 3 will be available in early 2016, Samsung have not revealed the exact date or pricing at this juncture.