While Android certainly commands the most marketshare for smartphone OS platforms, other mobile OS solutions like Windows are still gaining users, hence why various OEMs are still manufacturing handsets that run the software. Such is the case with Acer, who not only makes laptops and desktop computers, but also the largest amount of Chrome OS devices and quite a few handsets and tablets that run on Android, as well as a new handset called the Jade Primo that’s to run on the new Windows 10 mobile platform. The Jade Primo has yet to launch following the original announcement for the phone at IFA 2015, and already there are rumors spinning that Acer may be developing an Android variant of the phone.

While there is no confirmation from Acer on the existence of the Android-powered Jade Primo officially, benchmark data that was recently noticed on the Geekbench website for a device referred to as the Acer S58A states that the phone will be running on Android 6.0 software, meaning it would come shipped with Android Marshmallow, the latest version of Android software to date. The model number of the device is essentially the same as the Jade Primo which is S58, so while not official this is a clear indicator that the “A” likely denotes the Android operating system instead of Windows 10 for the Jade Primo.

Aside from the what is essentially the same model number, the Acer S58A comes with 2736MB of RAM (which translates to 3GB of RAM just like the Jade Primo) and a six-core ARM v8 Processor clocked at 1.44GHz. There’s no mention of any other specifications detail like the GPU, the battery, the cameras, or anything else, so the few hardware specs listed above is all there is to go off of. Having said that, the similarities, however few at this point suggest Acer has a Jade Primo running on Android in development. Whether or not they will continue to call that model the Jade Primo is just as unknown as if the phone is actually being tested and manufactured, though. When and if Acer officially announces this device, chances are that they’ll give up other important factors like availability and pricing details for the phone. 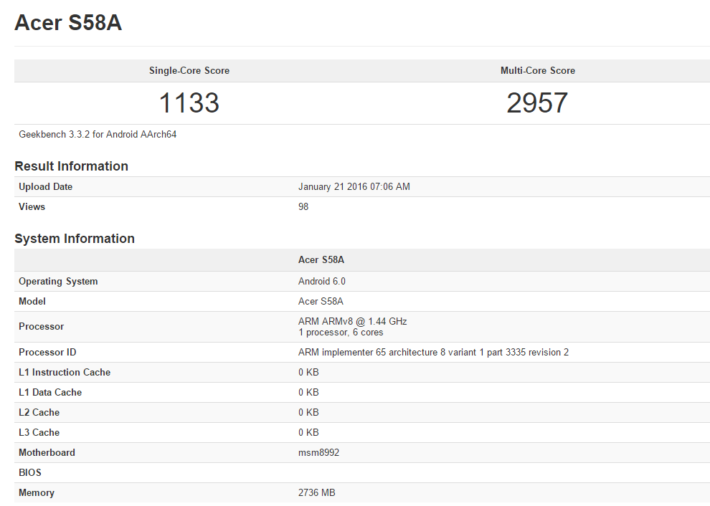