It did not take long after receiving two awards for best network for Bell to announce increases in their wireless prices as of January 12 – the first time in over a year.  The move is an attempt to increase the coveted ARPU (average revenue per user) – it dropped 7.7-percent during the third quarter in 2015.  As is the usual case in Canada, Rogers has also announced some price increases of $5.00 per month on some of its Share Everything Plans effective January 12.  We have not heard from Telus yet, but if history tells us anything, Telus will probably be making some price ‘adjustments’ as well.

Roger customers purchasing a new plan with 5GB, 9GB or 15GB of data will pay an additional $5.00 more per month, but at least Rogers has kept the $20 a month BYOD (bring your own device) benefit – Bell did away with this.  Taking the example at the bottom of this page, you can see that Rogers includes “No Tab (save $20/mo.), Smart Tab (save $10/mo.) and a Premium Tab.”  If you select the ‘Premium Tab’, your cost will jump from $110 a month to $115 a month (after today).  Also after today, the 15GB Premium Tab plan will jump from $160 to $165 per month.  The Premium Tab offers the highest device subsidy, so Rogers will charge you extra for your plan, whereas bringing you own device offers no subsidy on Rogers’ part, so they will knock off $20 from your monthly plan cost.  Rogers does offer many shared data plans between 500MB and 60GB, but from the documents that our source received only the 5GB, 9GB and 15GB plans are affected.

Bell also raised its prices on a few other options – they increased their Mobile TV plan from $5 per month for 5 hours of WiFi-based live TV broadcasts to $8 for the same amount of time.  Whether Rogers will follow with price increases to the optional products they offer has yet to be seen.  The price battles between the Canadian carriers seems to always be in flux – whatever one carrier does, the other carriers seem to follow, making it difficult to know whether it is best to stay where you are or jump to another carrier.  At least from recent studies, Canada does have some of the most sophisticated and fastest networks in the world. 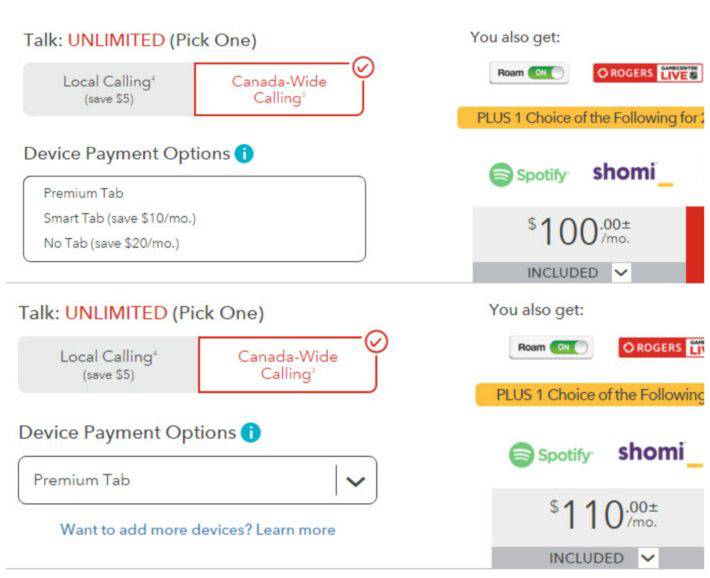