These devices do have a few things in common – they both use an AMOLED display for bright colors and fairly close in size – 5.0 vs 5.4-inches – however, they are different resolutions.  Both devices use a Qualcomm Snapdragon processor, but a different model with the OnePlus X going back to 2014 and 32-bit technology while the Droid Turbo 2 has a 64-bit processor.  The OnePlus X and Droid Turbo 2 both pack 3GB or RAM and are able to expand their internal memory via a microSD card slot.  Both have a non-removable battery with the large 3760 mAh Turbo 2 overpowering the small 2525 mAh found in the OnePlus X. Both have some of the usual suspects – WiFi, Bluetooth (v4.0 in the OnePlus X and v4.1 in the Droid Turbo 2), GPS and a microUSB v2.0 port for charging and data transfer.  The Droid Turbo 2 has NFC capability and the OnePlus X left out that feature.

I guess OnePlus decided to tackle the low-end market with the OnePlus X and used a selection of components that seem to be selected from a 2014 time capsule.  You have a processor from 2014, it has a Full HD display, and they did not use their usual LCD display, but an AMOLED display.  OnePlus does include a healthy 3GB of RAM, an expansion slot for memory, left out NFC, but included an FM radio.  OnePlus, always a company concerned with quality looks and feel, constructed the outside from ceramic, and captured a premium looking device…all for the price of only $249.

The OnePlus X sports a 5.0-inch AMOLED FHD display with a resolution of 1920 x 1080 pixels and 441 pixels-per-inch (PPI.)  The Motorola Droid Turbo 2 uses a 5.4-inch AMOLED QHD display and 540 PPI.  OnePlus went back to Qualcomm and snatched up the venerable 32-bit Snapdragon 801 quad-core processor clocked at 2.3GHz.  This goes up against the Droid Turbo 2’s 64-bit Snapdragon 810 octa-core processor that certainly outdoes the OnePlus X’s 801.  The OnePlus X is packing 3GB of RAM and 16GB of internal storage with a microSD card slot to expand that memory an additional 128GB.  The Droid Turbo 2 comes with 3GB of RAM and originally either 32GB or 64GB (64GB is now the standard) of memory with room for expansion.

The OnePlus X uses 13MP sensor with an LED flash and phase detection autofocus with videos in 1080p and 30fps.  The Turbo 2 uses the same 21MP camera found on the Moto X Pure Edition and should out shoot the OnePlus X.  The OnePlus X sports a larger 8MP FFC for selfies and video chatting while the Droid Turbo 2 uses a 5MP FFC.  Powering the OnePlus X is a small non-removable 2525mAh battery that should make it through a day considering its components.  The Droid Turbo 2 uses a much larger 3760 mAh non-removable battery that should easily make it through a day and then some and can take advantage of Motorola’s Turbo Charge.

The OnePlus X comes with 4G LTE connectivity that works on a few AT&T or T-Mobile bands and a single speaker at the bottom of the device and it sports an FM radio.  It is running Android 5.1.1 Lollipop with OxygenOS on top.  The device measures 140 x 69 x 6.9 mm and weighs in at 138 grams and will cost approximately $249.

The Motorola Droid Turbo 2 is part of the exclusive Droid line on the Verizon network with the Turbo model making its first appearance last year – this is the follow-up.  While the new model has retained essentially the same look, there were several improvements included – an all-new 21MP sensor for better pictures, faster charging, and the new ShatterShield display.  The Droid Turbo has a solid build and thru MotoMaker, you can customize the backing.

Motorola really improved the 21MP camera in the Droid Turbo 2 by using a new sensor, f/2.0 aperture, phase detection autofocus, and a dual-tone LED flash with a 5MP FFC for selfies and video chatting.  This goes up against a rather pedestrian 13MP main camera and a larger 8MP FFC.  The Turbo 2 has a huge 3760 mAh battery to offer up to two days of use, and if you should need to charge the device, it comes with a Turbo Charger for quick charges and wireless charging as well.  The OnePlus X has a small 2525 mAh battery and offers no quick charge feature.  Both batteries are non-removable.

The Motorola Droid Turbo 2 has dual front-facing speakers and is running almost stock Android, although Motorola adds their Moto Voice, Moto Assist, Moto Display and Moto Actions.  It includes NFC for mobile payments, something the OnePlus X does not have and a fast charge battery.  It also has an IR Blaster and wireless charging as well as Turbo Charging for its much larger battery.  The device measures 149.9 x 78 x 9.2 mm and weighs in at 169 grams and will cost approximately $625. 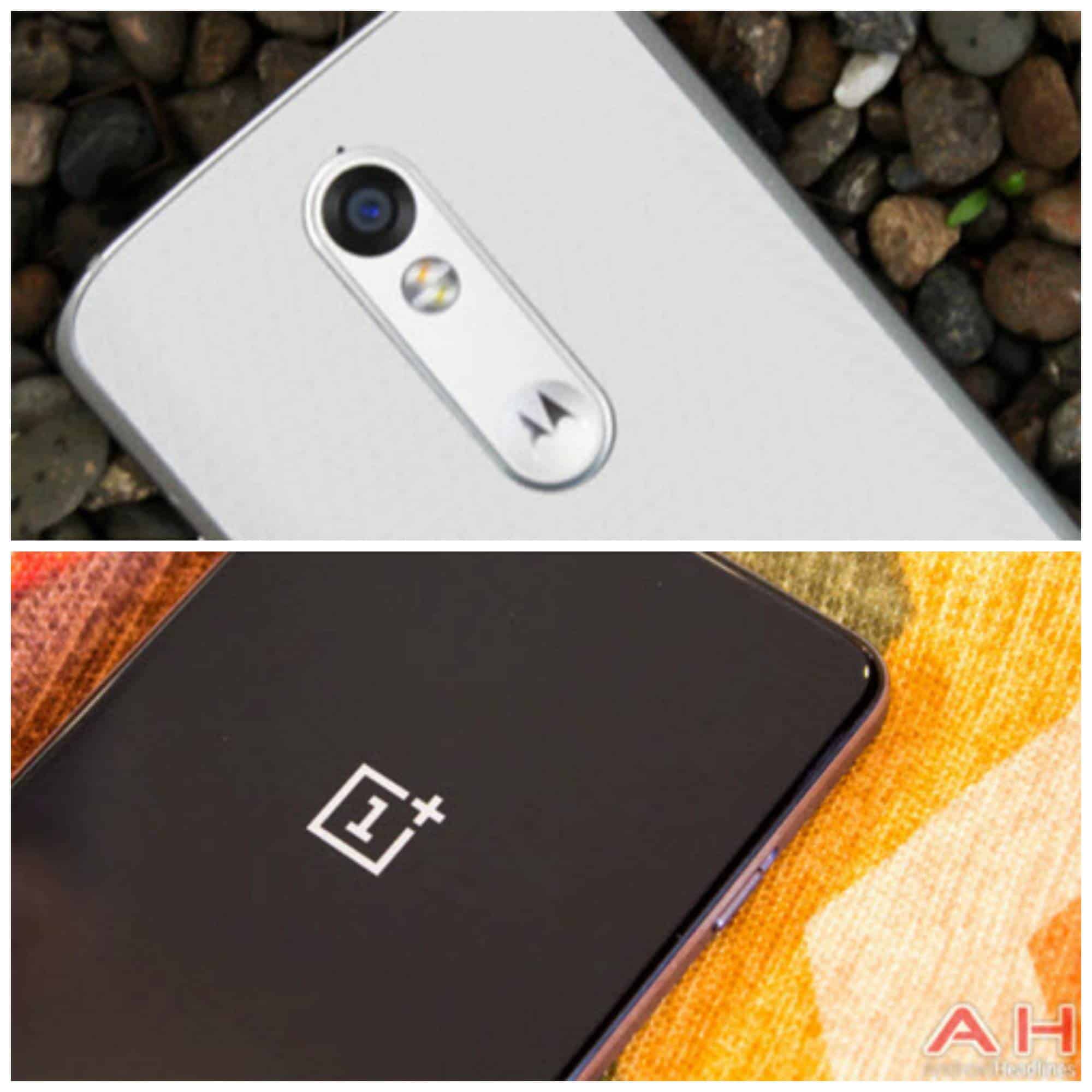 I just had to break this down into two winners – these two devices are miles apart in features and specifications.  If you want the device with the best specs, then you will want to pick up the Droid Turbo 2.  However, if all you want is a great budget smartphone, the pick up the OnePlus X.

The OnePlus X offers a solid build, a very respectable Full HD display, a decent camera with a large 8MP FFC, 3GB of RAM and room for expansion of the internal memory.  While the 32-bit Snapdragon 801 quad-core processor is somewhat dated, it is a solid performer.  There is no fingerprint sensor, no NFC capabilities, no rapid charge and no IR Blaster, but for $249, what do you expect?

The Motorola Droid Turbo 2 has a QHD AMOLED display, a slightly larger display, NFC capabilities for mobile payments, an IR Blaster, fast Turbo Charging and wireless charging. It comes with dual front-facing speakers, a Snapdragon 810 octa-core processor, expandable memory, a huge battery, a shatterproof display, a much better camera and it is running almost pure Android…as pure as you can get from Verizon.  It will run you about $625, which is considerably more that the OnePlus X.  But, if you are on the Verizon network and want the high-end device in this group, then the Droid Turbo 2 is your clear choice.