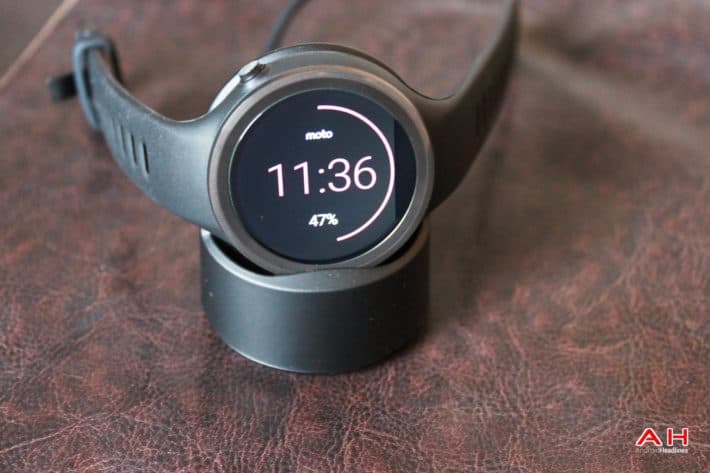 The new, second generation, Moto 360 Sport watch has launched in Canada and is available at Telus, although it will soon follow at Best Buy in the next few days.  It is being offered in Black or White and will carry the same $380 price tag of the second-generation metal Moto 360. The main difference is that the Sport model uses a body made out of plastic and silicone that will repel sweat during those tough workouts or light rain during an outdoor run.  It also has a built-in GPS that will keep track of your runs, pace and other physical activities, but more importantly, you can leave your smartphone at home. It works with popular apps like MapMyRun, Under Armour Record, and Strava and comes with a charging cable and charging pad.

When Motorola launched the first Moto 360, there was pretty much one variation to choose from, but the second generation launch also included a smaller 'ladies' version and the new Moto Sport 360.  The Sport model varies in the few ways mentioned above, but it also has an affixed strap and Moto included a hybrid display they call AnyLight – and as the name suggests, you can adjust the back-lighting to see the display better in the sunlight.  This is a great feature for those that tend to exercise outside and need that readability.

The Moto 360 Sport comes with a 1.37-inch (35mm) AnyLight Hybrid display with Gorilla Glass 3 for protection and has 263 pixels-per-inch (PPI).  A Qualcomm Snapdragon 400 quad-core processor clocked at 1.2 GHz with 512MB of RAM and 4GB of internal storage provides the brains and a 300mAh battery delivers the power to the device.  For its GPU it uses an Adreno 305 clocked at 450 MHz.  Sensors include a Barometric Altimeter, Accelerometer, Ambient Light Sensor, Gyroscope, Vibration/Haptics engine, and Optical heart rate monitor (PPG).  It carries Bluetooth 4.0 and WiFi 802.11b/g, so you can decide how it will communicate with your smartphone or another source.  The Moto 360 Sport has an IP67 rating to protect it from sweat or rain, a built-in heart rate monitor and dual microphones for voice functions.  Coming in at 45mm, it weighs only 54 grams, so it is very light companion when doing your workouts.