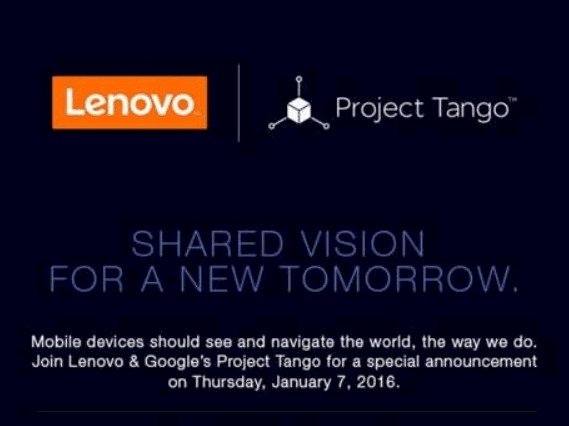 As some of you might remember, Project Tango was introduced by Google back in 2014. This is basically a technology which allows devices (like smartphone and tablets) to detect their position in the world around them. In other words, Project Tango combines 3D motion tracking with depth sensing, which basically allows the device equipped with this tech to know where they’re currently at, and map what surrounds them in a way. Project Tango’s original purpose was to create indoor maps in 3D, the tech is actually perfect for something like that.

That being said, it seems like we’ll see a glimpse of Project Tango during CES in Las Vegas this month. Google and Lenovo have released a teaser image which hints at Project Tango-related announcement. The caption reads ”Mobile devices should see and navigate the world, the way we do. Join Lenovo & Google’s Project Tango for a special announcement…”, and the image also reveals that the announcement will occur on January 7th. So, we can always guess what will this announcement be about, but a Project Tango-enabled smartphone is the most probable outcome.

Now, Google has unveiled a tablet development kit using Project Tango last year. This tablet was fueled by NVIDIA’s Tegra K1 processor, and it also sported 4GB of RAM and 128GB of internal storage. This was a 7-inch tablet which featured a 1080p (1920 x 1080) display, and only 4,000 units were manufactured by the company. This tablet wasn’t cheap at all, it carried a $1,024 price tag. The Mountain View giant has also released a Project Tango smartphone, but only 200 units were manufactured, and neither the tablet nor this smartphone were made available for the general consumer. Project Tango originally used a 4-megapixel rear-facing camera, 180-degree fish-eye lens, and a front-facing shooter with a 120-degree lens, while a depth camera shooting was also a part of the mix.

There you have it. Lenovo and Google are going to make a Project Tango-related announcement on January 7th, and it remains to be seen what exactly will they unveil. A smartphone is the most probable outcome, but we’ll see, stay tuned. we’ll report back soon.