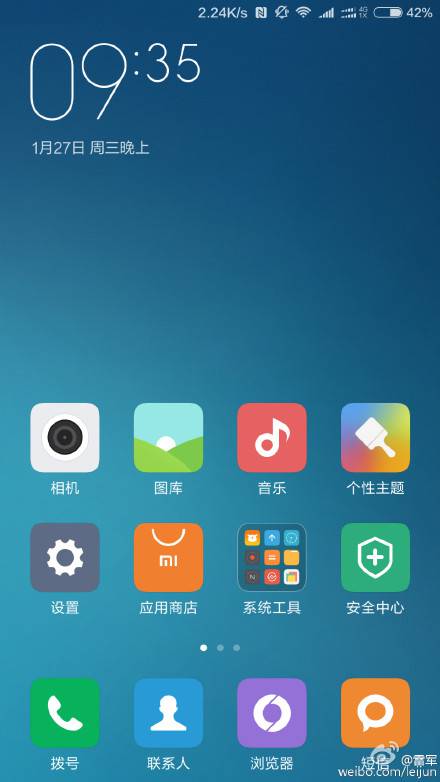 Xiaomi Mi 5 is, next to the Galaxy S7, the most rumored and leaked device in the last couple of weeks. This smartphone has been popping up left and right for quite some time now, and the company has recently confirmed that the device will be announced in Beijing on February 24th. Earlier today, Xiaomi has confirmed that the Mi 5 will also be announced in Barcelona during the Mobile World Congress on that very same date, which is actually quite exciting and does suggest Xiaomi will roll out in quite a few new markets in 2016.

The Mi 5 has leaked plenty of times thus far, and we've also seen a couple of benchmark listings as well. Today we have a new piece of info to share with you, and it comes straight from Lei Jun, the company's co-founder. Lei Jun has published a rather interesting screenshot on his official Weibo page, and suggested some new features are coming to the device. He not only confirmed that the phone will offer NFC support (which confirms the report which surfaced a couple of weeks ago), but dual-SIM capability as well. If you take a look at this image, you'll notice the NFC sign on the taskbar in the upper portion of the device. Now, next to the battery indicator, you get to see two separate network connections, which confirms dual-SIM support as well. Lei Jun is obviously trying to add some more hype to the Mi 5 launch, but there you have it, NFC and dual-SIM have been confirmed.

According to rumor, the Mi 5 will actually arrive in several variants, four to be exact. The leaked info says that Xiaomi intends on launching two all-metal, and two metal + glass variants of their new flagship. The standard all-metal unit will ship with 3GB of RAM, while the higher-end model will come with 4GB of RAM. The metal + glass variants are said to sport 4GB of RAM, but come in different internal storage options. All Mi 5 device will be fueled by the Snapdragon 820, that much has been confirmed by the company's exec. The 16-megapixel rear-facing camera has been mentioned in rumors as well, and so has the 3,600mAh battery, and Android 6.0 Marshmallow which will ship with MIUI 7 OS on top of it.