CES kicks off in less than 24 hours for press with official event happenings beginning on Tuesday, January 5th, and while Samsung was first rumored to potentially be showing off the Galaxy S7 at the event, it now looks like they are prepared to unveil the device at a little bit of a later date, during their recently announced Unpacked event set to happen at the end of February. According to recent details the announcement may not be far off. It's only a few days into 2016 and more leaks have popped up surrounding Samsung's upcoming flagship device for the year to succeed the Galaxy S6 range, with a leaked screenshot that displays the new phone will come with a 12.2MP rear-facing camera.

What's more is that it also shows the device sporting a 5.7-inch display, which would put it around the same size as the Galaxy S6 Edge Plus and the Galaxy Note 5 rather than the Galaxy S6. Having said that, it's entirely possible that this could be another variant of the Galaxy S7 as rumors have been stating Samsung will be offering the Galaxy S7 in two different sizes, one potentially being a model at 5.5-inches, although it may be more likely to see the Galaxy S7 standard at 5.1-inches while the one allegedly shown in this leaked image could be the Galaxy S7 Edge.

The picture also alleges the Galaxy S7 will come with 3712MB of memory, which equates to 4GB of RAM, and that it will carry a 5MP front-facing camera for selfies and video chat. Among the already listed specifications, according to the image this model of the phone will also feature a Quad-HD display which is something Samsung is already implementing on their devices, so there's nothing new there, and the listed GPU is the Adreno 530 which will come paired with the Qualcomm Snapdragon 820 CPU. Consumers can expect the Galaxy S7 to also feature a fingerprint reader to be used for security unlock and mobile payments using Samsung Pay, and it's also rumored that Samsung may integrate an iris scanner into this year's devices. A handful of Chinese phone brands are already using this technology, so it's possible Samsung could be looking into it for their next flagship, although nothing is certain at this point. 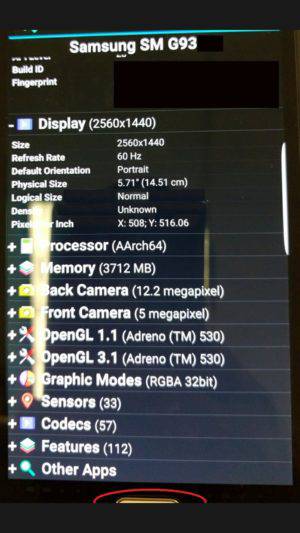