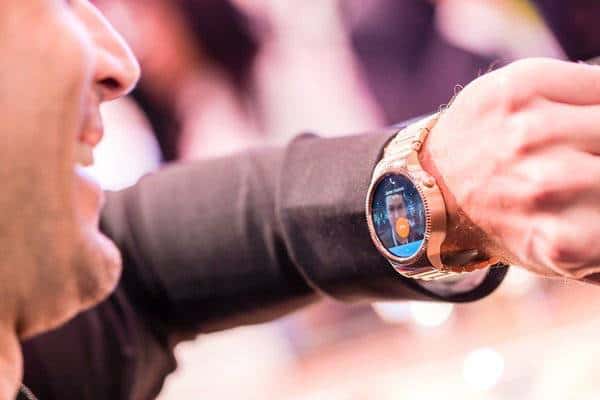 It’s been an interesting week at CES 2016 so far, and while there’s been all sorts of talk about the ‘Smart Home’ and the Internet of Things, Wearables and Virtual Reality have been the biggest draws. Fitbit introduced their new fitness-focused smartwatch, the Oculus Rift went up for pre-order, we had fun with the VIVE from HTC and Huawei and Samsung introduced new watches. Both Samsung and Huawei have similar smartwatch produces on offer with the Huawei Watch and the Gear S2, but the latter can take and make phone calls. It looks like this ability is coming to the Huawei Watch, and perhaps Android Wear across the board, sooner than we first thought.

We had previously heard that Huawei was testing a new version of Android Wear on the Watches already out there to enable the built-in speaker, but we didn’t know they would be working on the feature to launch this soon. A tweet from the Huawei Device account shows a picture of someone at CES 2016 with a Huawei Watch on their wrist taking a call. From the display we can see that the dialler looks very “Material” which suggests to us that this could be a feature heading to all Android Wear devices (at least those with a speaker built-in to the existing hardware, like the Huawei Watch, that is). Android 6.0.1 Marshmallow has rolled out to devices running the latest version of Android, but it hasn’t made the jump to Android Wear yet, so there’s a chance that this could be part of that new update.

Earlier this week, Huawei introduced new variants of the Huawei Watch, the Jewel and Elegant, offering up more feminine-focused designs, and it appears as though this is what’s being used in the photo. Either way, there was nothing about this new feature in the press releases from Huawei, so it appears like this is a feature that’s still in the works, but one that could be coming much sooner than we thought. What this means for the rest of Android Wear is unclear, but it could be a sign that 2016 is the year that Android Wear watches are released with the ability to take calls.