HTC built a fanbase based on their distinctive designs and build quality of their products. Their Sense skin has been considered among the better customizations of the Android operating system, as it combines nice looks with good functionality and performance. Still, while some components were considered very good, some others prevented those who appreciated the design of their products to actually buy them. The biggest problem was the cameras the company used in their recent products, which is one of the most important components nowadays.

In 2015, the company failed to impress those who were expecting HTC’s new flagship offering, as the design closely resembled its predecessor and the camera was still not very good. The company made many phones based on that same design in all sorts of sizes and including more features, but most of them weren’t released worldwide. Then, the One A9 was introduced, with a design that resembled the iPhone and mid-range specs. With this phone, the company came up with a new strategy, which was based on making the features and services that came with the phone more important than the phone itself, those included the latest version of Android, an unlockable bootloader and services like the Uh-Oh protection against accidents. More recently, the company announced the One X9, but it doesn’t sport the latest features and it’s not yet available.

The annual financial report of HTC has been released and it suggests that HTC was unsuccessful with all of their attempts to get some market share in the mobile market. From the report, we can see that the company made $121.68 billion NT ($3.65 billion USD) in terms of sales in 2015, and in 2014 that amount was $187.91 billion NT ($5.64 billion USD), this represents a 35.24% decrease between those years. The HTC One A9 went on sale in November and that month the company shows some increase in sales, but the sales declined 36.64% in December. The company now seems to be betting on their brand new VR headset called HTC Vive to turn in some profit this year. The company might also recover if they release a flagship device with a great camera, good design and solid build quality, besides the extra features and services that the company has included in some of their recent devices. 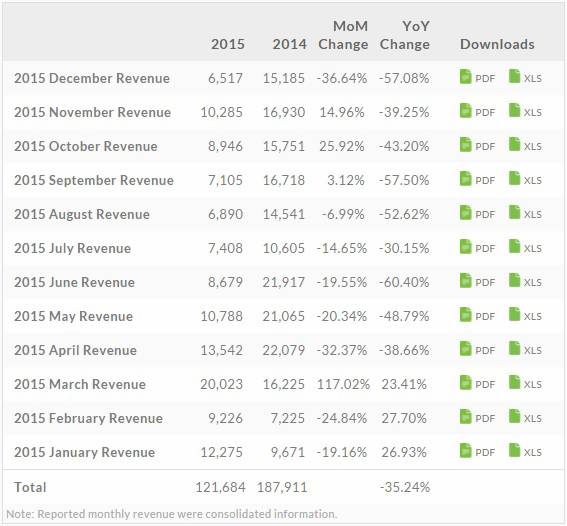