If you recently picked up that shiny new Huawei Mate 8, Mate S or Honor phone running Huawei’s own Emotion UI, you might be missing notifications that you’ve been seeing on other phones.  Modern smartphones work wonders with notifications, particularly Android phones because of the design of the OS, but because of power saving features on Huawei’s EMUI Android skin you might not be getting all the notifications you’re used to getting.  This includes anything from emails to texts, or even data-based messaging apps like Hangouts and Facebook Messenger among others.  If you’ve found yourself running into this problem we’ve got a quick and simple fix for you that will only take a few seconds of your time. If you’re missing notifications from commonly used apps it’s likely because the default power profile is set to only keep a small list of apps running in the background, a process that keeps the other apps from performing any kind of activity on the phone unless they are run in the foreground.  To access this power profiles section head on over to the system settings area, which you can either find in the quick toggles portion of the notification shade by pulling down the status bar on the top portion of the screen, or heading to the settings button on your home screen or app drawer.  From here scroll down to Advanced Settings and head on over into Battery Manager.  The Protected Apps selection is what you’re looking for here, and this will control what’s allowed to run when the screen is off and what isn’t. 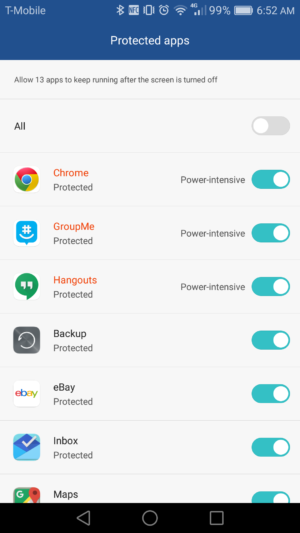 From here you can cherry pick which apps are allowed to run, and you’re likely going to want to make sure your favorite email and chat apps are included in the list of enabled apps.  EMUI will let you know which apps are “power-intensive,” but if those are your favorite apps it’s not going to do you a lot of good to keep them from running.  If you’d rather allow every app on the phone to run all the time feel free to check the All slider at the top, however note that this will cause significant battery drain compared to the default values.  We put this tutorial together using a Mate 8 on EMUI 4.0, so your screen may vary slightly depending on what Huawei phone and version of Emotion UI you’re running, but the process should be similar nonetheless.  Enjoy those important notifications again!