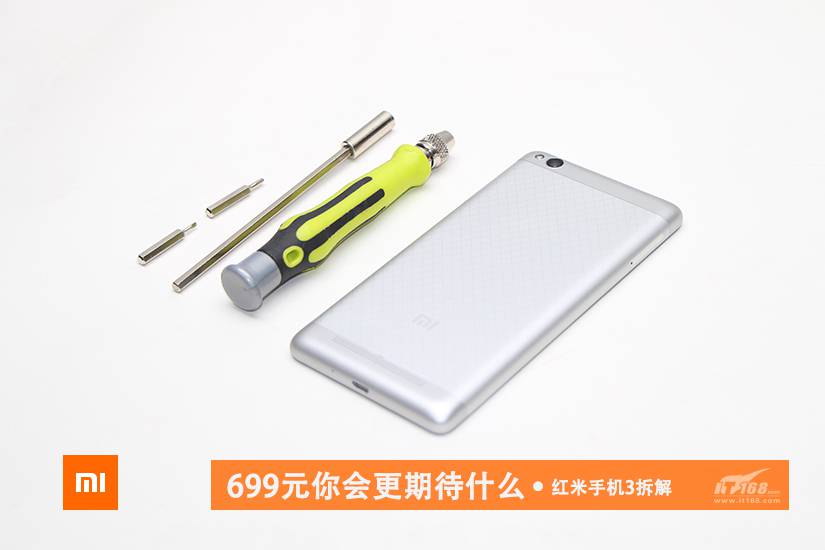 The new year has barely begun, and Xiaomi has already introduced two new handsets. One of those two handsets is the Redmi 3, the company's newest entry-level smartphones. The Redmi 3 is a direct successor to the Redmi 2 which was announced a year ago, and considering it costs only 699 Yuan ($106), it really does have a lot to offer. Not only does it ship with better specs compared to its predecessor, but it also comes with a metallic design.

We've already covered the initial announcement of this handset, and are here to expand our Redmi 3 coverage. The first Redmi 3 teardown has surfaced in China, courtesy of IT168. If you take a look at the gallery down below, you'll get to see the Redmi 3 in pieces. The whole procedure has been documented in the images you can see down below, just in case you'd like to check those out. The Redmi 3 wasn't all that difficult to disassemble according to the source, the device shouldn't be all that difficult to repair, and they didn't find anything out of the ordinary on the inside of the Redmi 3, which is a good thing. If you'd like to know more, check out the images down below, but before you do that, let's take a look at Redmi 3's specs, shall we.

The Xiaomi Redmi 3 features a 5-inch HD (1280 x 720) display, 2GB of RAM and 16GB of expandable internal storage (up to 128GB via a microSD card). The device is fueled by the Snapdragon 616 64-bit octa-core processor, and a 4,100mAh battery is available on the inside. On the back of this phone you'll notice the 13-megapixel snapper, while a 5-megapixel one is placed on the front side of this smartphone. The Redmi 3 is a dual-SIM handset, and it ships with MIUI 7 installed on top of Android. The device measures 139.3 x 69.6 x 8.5mm, while it weighs 144 grams. the phone looks far more premium than its predecessor, and it is available in Silver, Grey and Gold color options. As already mentioned, the device is priced at 699 Yuan ($106) in China, just in case you're interested in getting one.