2015 seems to have been the year that wearable devices finally took off, both commercially and inventively.  Sure we've had wearable devices for years now, particularly fitness trackers, but they've either been lacking in one area or another or simply too expensive for most people's tastes.  Earlier in the year Xiaomi wowed the world with its own Mi Band, which offered many popular features like step and sleep tracking, but lacked pizazz in the design front and didn't feature a heart rate monitor, although it's difficult to complain about such things when it costs a measly $13.  This time around Xiaomi is bringing the Mi Band 1s, following the naming scheme it started with its budget-priced yet high-specced smartphones and offering some significant feature enhancements all while retaining an incredible $15 price tag.  Better yet Xiaomi's distribution worldwide is much better this time around, and hungry customers will likely be able to net one for a similar price no matter where they live in the world.  Let's see what's improved from the previous generation and whether or not this one is going to do as well as the previous generation did. 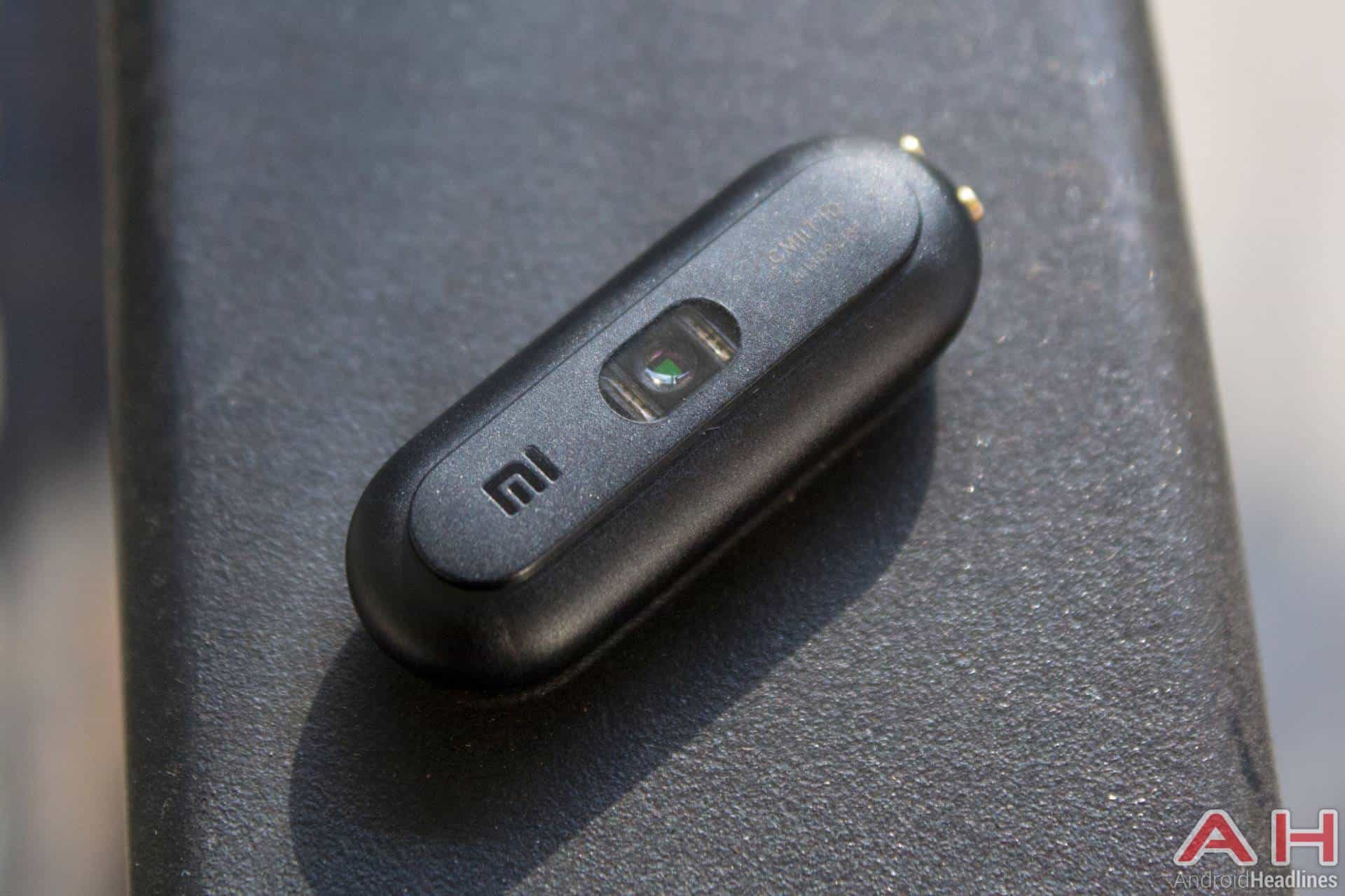 From the onset of looking at the box you know this is a Xiaomi product.  Found inside of the usual plain square cardboard box with a simple Mi logo on it is the fitness tracker itself, the silicone band and a small USB charger.  While this box looks identical to the original Mi Band's box the contents feature updated hardware that's going to give you an even bigger value for your money and features a rather sleek presentation once opened.  The fitness tracker itself is actually a squared off ellipse which measures 37mm wide, 13.6mm tall and 9.9mm thick, making this one super small piece of equipment.  On top of the black plastic puck sits a brushed aluminum plate which contains an ellipses of 3 dots, completing the design with some beautiful harmony.  Situated on one side are the two charging prongs, while underneath you'll find the heart rate monitor.

The real beauty of this design isn't just in the small size of the tracker itself, it's in the way that Xiaomi's accessories all fit the band.  The puck itself sits just inside of any one of the many accessories out there, and while the plain silicone band included is hypoallergenic and fits tightly around the puck, there are all sorts of designer bands that can be purchased as well as necklaces too.  To charge the tracker you simply insert it into the dock that's included, which is attached to a USB cable about 15cm long.  While there's no included wall charger with the package it's likely that you've already got a mess of USB wall chargers lying around, or else maybe a fancy outlet with USB plugs in it.  The whole thing takes just a couple of minutes to charge, which makes sense since the battery is only 45mAh capacity.

The tracker itself weighs only 5.5 grams and is IP67 water and dust resistant, so you don't have to worry about it getting ruined when simply living life.  The included band weighs 14 grams and measures 225mm long.  It will adjust on the wrist with a simple push pin for wrist sizes ranging from 157mm to 205mm circumference.  This band ships in six different colors including black, blue, teal, orange, pink and green.  The tracker features military grade Bluetooth 4.0 and accelerometer chips, as well as a brand new Photo Plethyamo Graphy (PPG) heart rate sensor.  People with larger or smaller wrists will need to buy another band, or another type of accessory like a necklace to utilize the tracker properly.  The band itself is incredibly comfortable, at least on my wrists, and it's so light and flexible I forgot it was there most of the time during the day.  It was only when I needed to wash my hands or take it off that I remembered I was even wearing it in the first place. 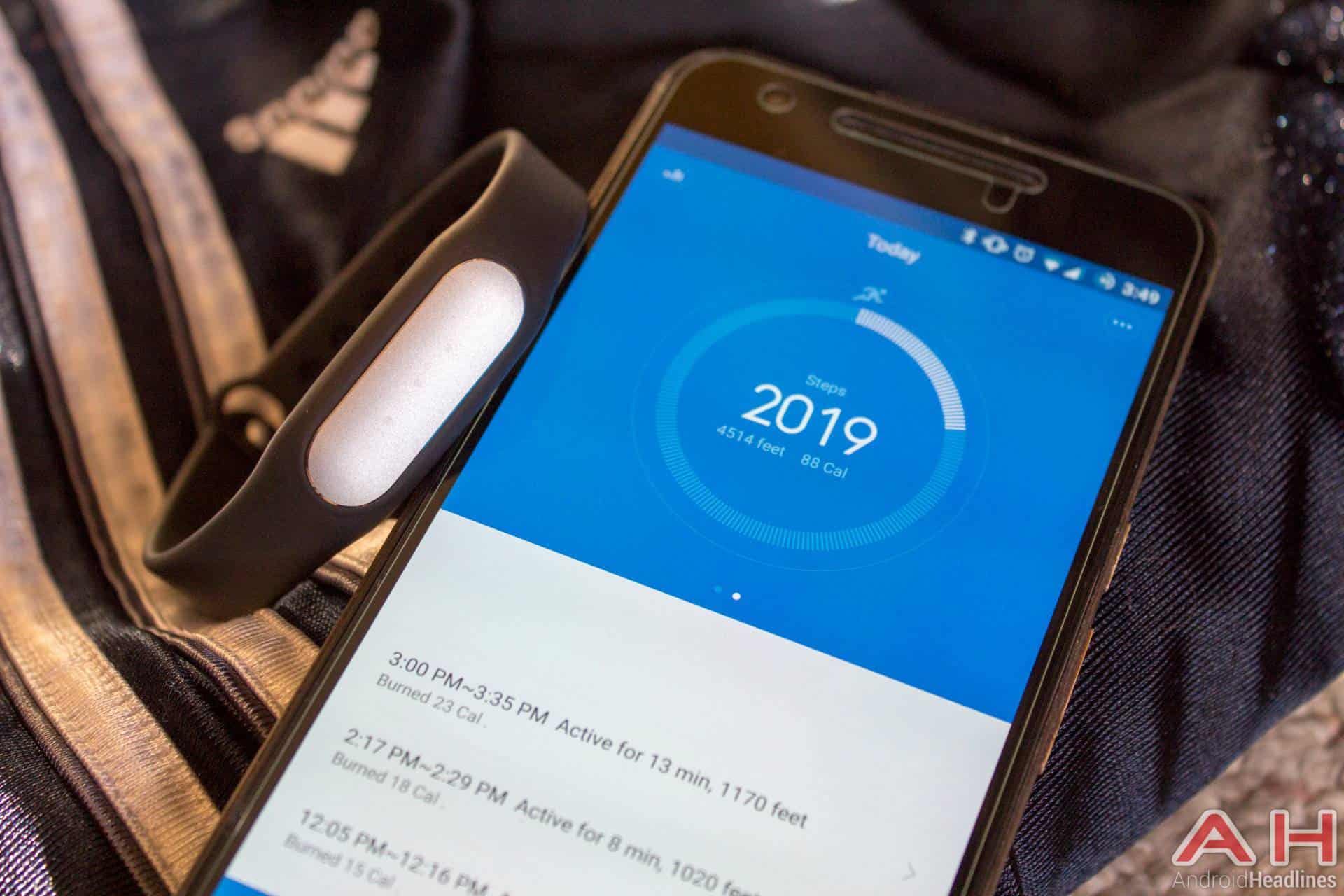 What's a fitness tracker without specialized software made for it?  Not much of course since it likely wouldn't have easy access to all the data tracked, and thankfully Xiaomi has a perfectly competent app that's the same as its previous Mi Fit app.  This time around it of course has support for that heart rate sensor and all the extra data that it tracks.  Steps are tracked throughout the day and tallied at the end of the week to let you know how well or poorly you've done.  I used the band the week before and particularly the week during the CES show in Las Vegas to see just how accurate it is versus Google Fit's integration with my phone and Android Wear watch, and overall they're pretty close.  Google Fit measured 106,397 steps during this time frame while Mi Fit measured 99,237 steps.  In addition to steps counted, the app also estimates distance walked or ran, as well as calorie burn for the allotted time frame.

Data is presented in a number of ways, although overall app navigation can be quite confusing at times.  The main screen presents you with steps taken or last night's sleep quality, depending on when you open the app.  The app and fitness tracker will automatically switch modes between sleep and step tracking, so there's nothing you need to do (or can do) to manually switch the mode.  On the top is a large circle that looks nearly identical to most Xiaomi apps, this time showing steps taken, distance walked and calories burned at a glance, as well as a radial dial showing percentage of your goal for the day.  A swipe over is the sleep tracking window which shows total sleep as well as deep sleep, and of course the same radial dial showing percentage met of the set goal.  The presentation of the app is nothing short of beautiful and features colored status bars a well as a colored nav bar if your phone has software buttons.  Transitions between screens are beautiful and there are subtle 3D effects throughout the app that are pleasantly designed and give off a sophisticated feel. 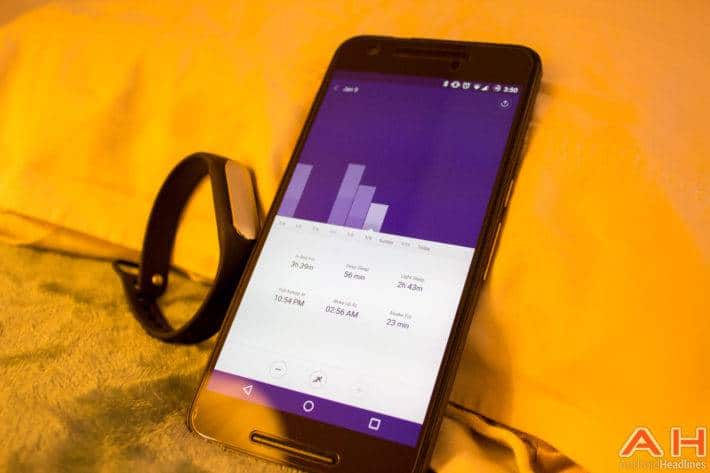 Clicking on the large wheel on the main screen will bring you to the day's or night's individual stats, showing a breakdown throughout the night or day with a full timeline and markers for easy visual reference.  Pressing on any of the lines on this graph will give more detailed information at the top, while the average breakdown of all activity is located below the graph.  A small button located near the bottom will switch between day and night stats for the last 24 hour period.  The confusing part comes in how to find the rest of the stats and historical data, where you'll need to go back to the main screen and click on the graph at the top left.  This will take you to another daily tracking screen, this time showing the average of each day in a chart instead of detailed minute-by-minute data.  From here the plus and minus buttons at the bottom will move between day, week and monthly averages, all showing graphical data as well as numerical summaries of each category.  Again a night mode button at the bottom will switch between fitness and sleep tracking, with the same graphical and data options presented for both. 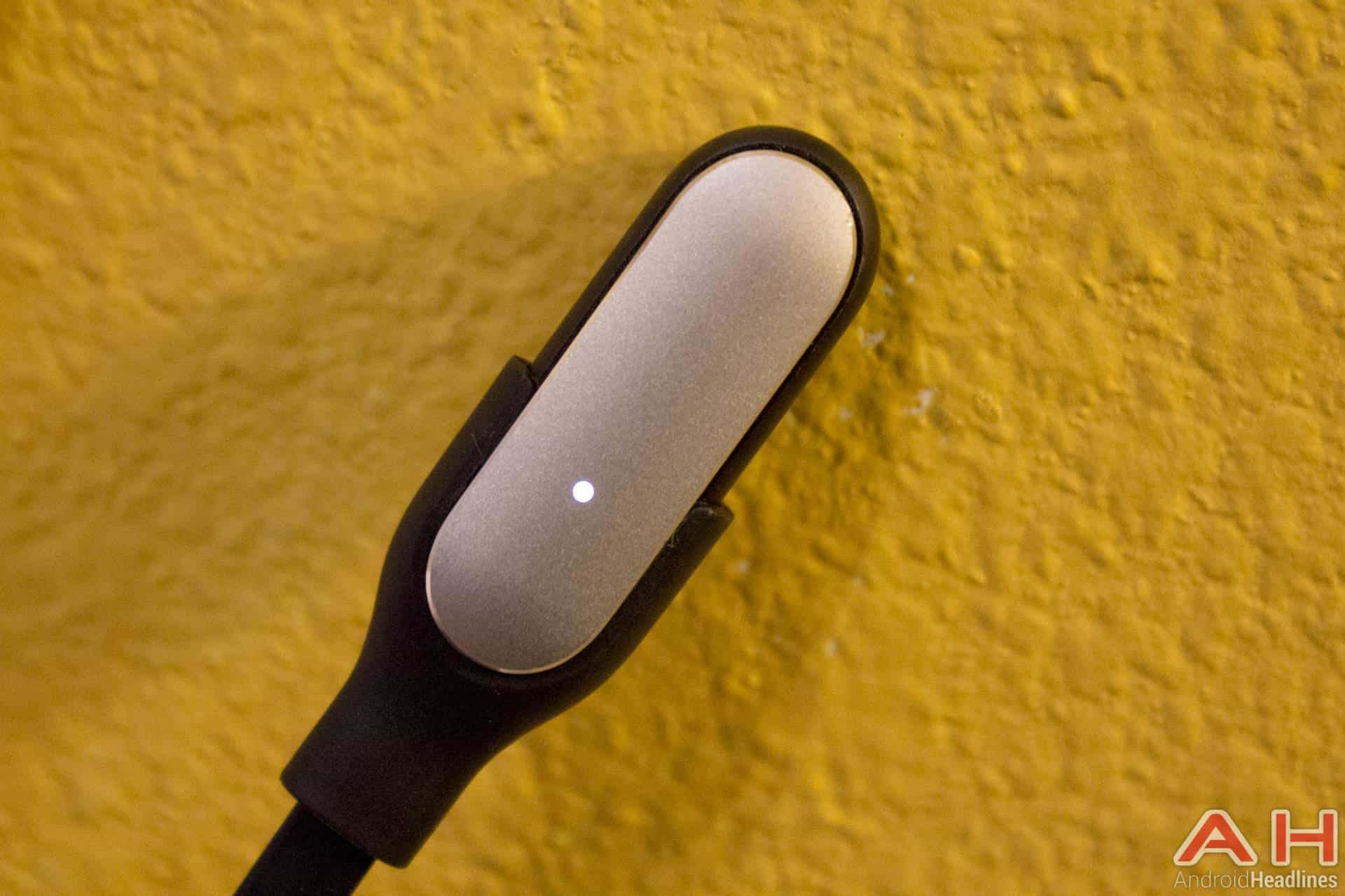 Moving into the settings portion of the app you'll find another large circular graph, this time displaying the battery stats and how long it has lasted.  In my usage it seems like the Mi Band 1s should last at least 20 days on a single charge, a feat that any smartwatch could only dream of.  From here you'll be able to find your band if it gets lost, which only works so well since it just vibrates the band twice and makes no noise.  This means if you lose it in a couch or somewhere else that won't resonate the vibrations you're going to find this feature pretty useless.  You can also set the band to be on your right or left hand, or worn on your neck, all of which track stats just a little bit differently for maximum accuracy.  As is the case with any paired Bluetooth device in Android you can use it to keep your phone from password locking while it's connected, an option that's easily accessible either in the Mi Fit app or system settings for your phone.

In addition to these settings you'll be able to use the band as a notification minder, and while this is limited to 3 apps that's probably for the best since you wouldn't want it buzzing all day long without some more visual information from the band.  Incoming calls can also buzz the band, although that'll keep the app running in the background, a process that will have at least a small negative effect on battery for both the phone and the fitness tracker.  Users looking for more accurate sleep tracking will find that the band can monitor your heart rate throughout the evening to make sure you're actually sleeping, as well as compare this data to determine deep and light sleep schedules better.  Unfortunately, this information doesn't appear to be saved and can't be accessed outside of the manual heart rate monitor section that keeps a history of manual heart rate scans.  Last but not least are notifications for daily step tracking, delivered automatically at 9:30PM (21:30) and sleep data notification when you wake up and physically get out of bed.

App navigation can be confusing 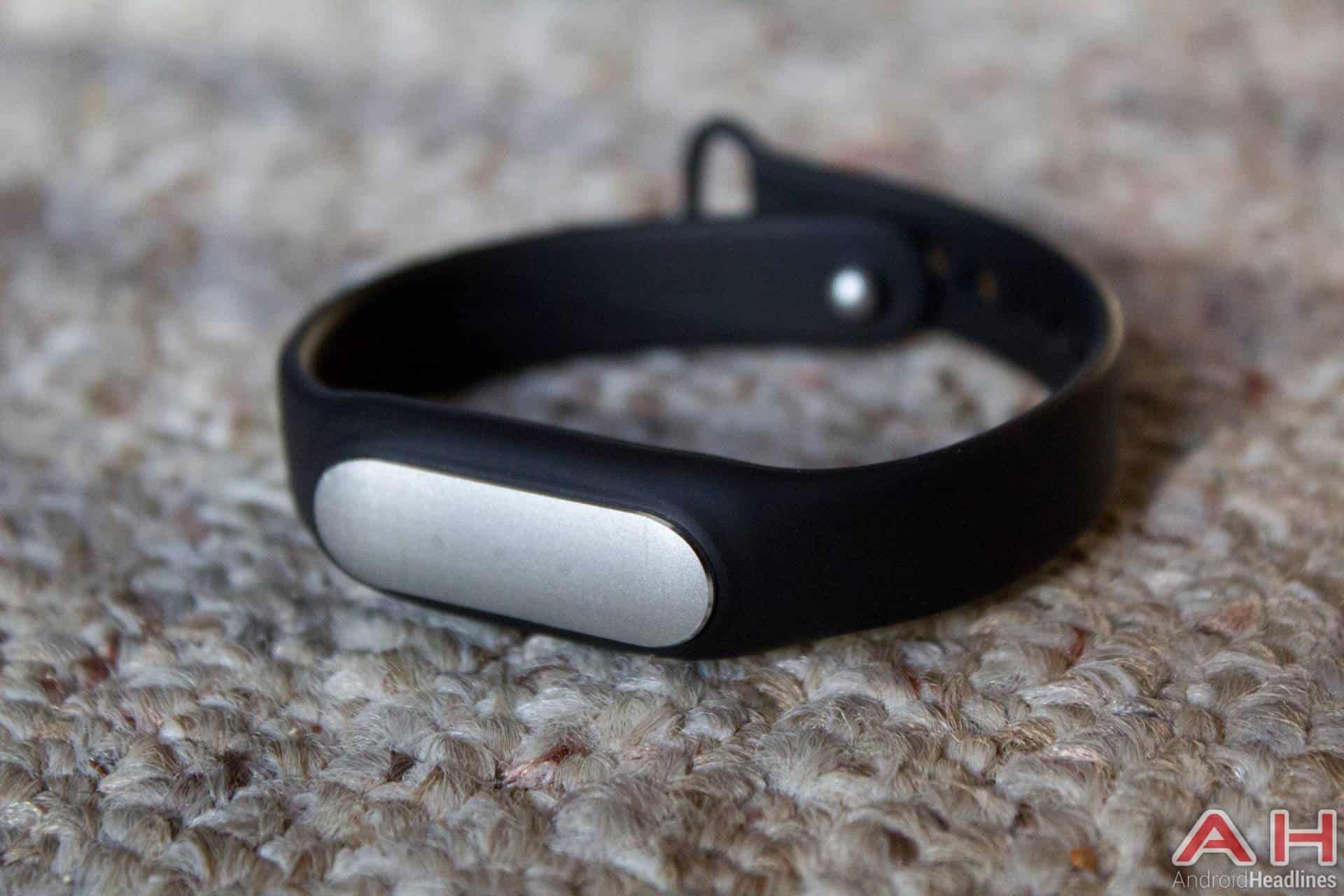 Xiaomi has done a rather incredible job with the Mi Band 1s, a clear upgrade from the original Mi Band thanks to the more reliable chipsets and the brand new heart rate sensor.  Unfortunately, they didn't go all the way with this heart rate sensor, as it doesn't appear to store the data anywhere in the app for you to access later, unless you're fond of constantly manually measuring your heart rate of course.  Still it's difficult to not recommend this to anyone looking for a fitness band that measures both fitness time as well as sleep, even if it doesn't directly integrate into other fitness apps.  This last part might be the biggest turn off though for some users, as plenty of people have invested lots of time into services like Fitbit, My Fitness Pal and the countless others on the market for tracking their meals, calories burned, etc. Still, at least the Mi Fit app gives you great breakdowns of sleep cycle and other fitness data that can easily be manually plugged into your favorite fitness app out there, even if doing it manually every time is annoying.  $15 nets you one unbelievable set of equipment that's well built and tracks stats well enough though, especially for a literal fraction of the price of others on the market.

Buy The Xiaomi Mi Band 1S From GearBest
Advertisement
Trusted By Millions
Independent, Expert Android News You Can Trust, Since 2010
Publishing More Android Than Anyone Else
2
Today
145
This Week
605
This Month
1279
This Year
111389
All Time
Advertisement