Tronsmart is a company who has really embraced Qualcomm’s Quick Charge technology. Launching all sorts of Quick Charge 2.0 products – including car chargers, wall chargers and now USB Hubs – and already have a few Quick Charge 3.0 products available. Tronsmart’s products have been pretty high-end, for the models we’ve reviewed already. Definitely a great company for having premium chargers, but not premium prices.

Now we’ve had the chance to spend some time with the Titan. The Titan is their newest Quick Charge 2.0 product, coming in at under $40. It’s a 5-port USB Charging Hub, but it’s not like the hundreds of others out there. It supports Quick Charge 2.0. Others do, but very few support it in each and every port. That’s right, you have 5 Quick Charge 2.0 ports here on the Tronsmart Titan, great for charging up any and every device in your home. 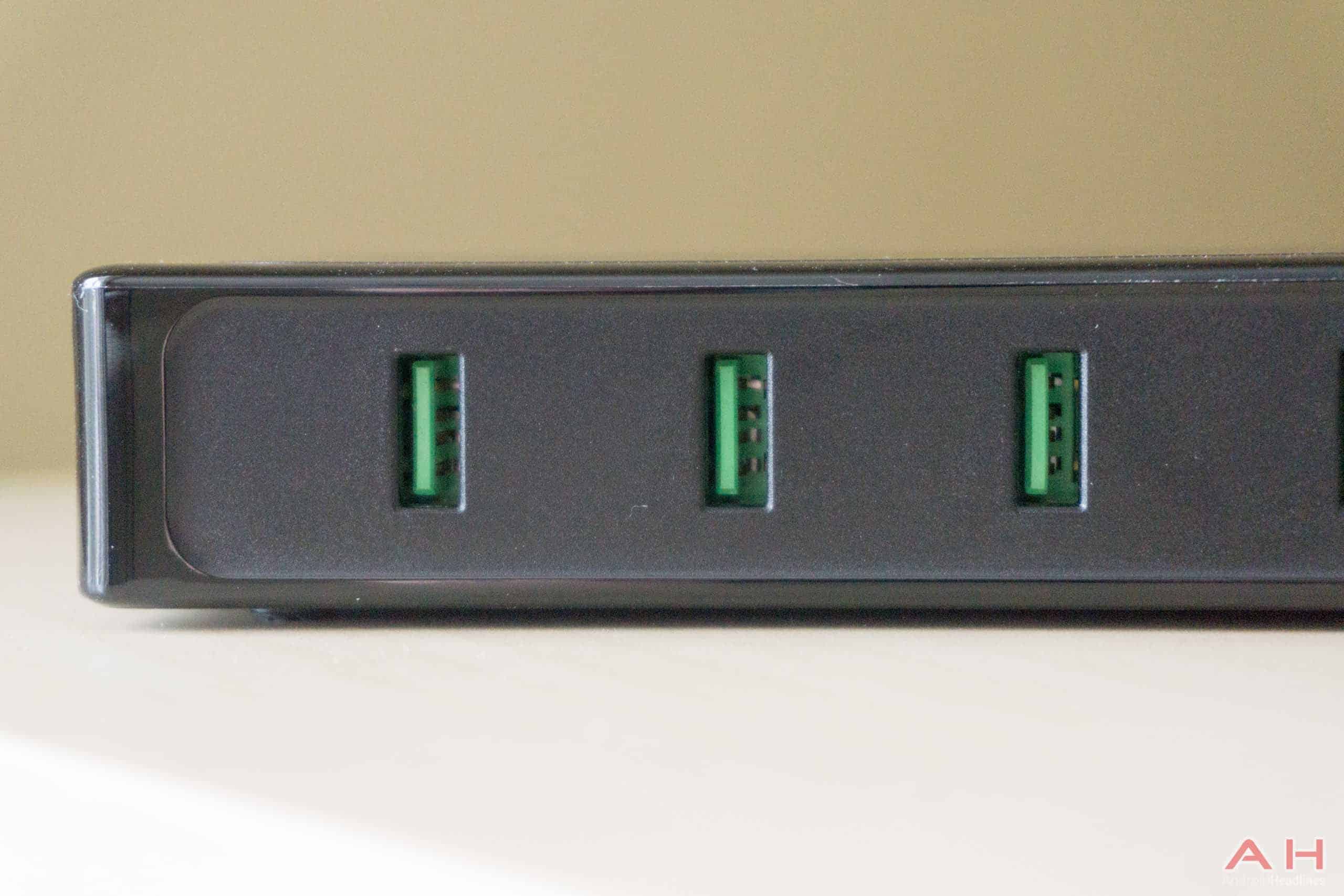 The design of the Tronsmart Titan is pretty similar to the other charging hubs available on the market now. It’s a rather flat and rectangular product with 5 vertical USB ports on the front. On the back there is a on/off switch as well as the plug. Now the power button is back there so that if you lose power at home, you can simply turn off the Titan and when power comes back on you don’t have to worry about shorting out the Titan or the devices connected to it.

Titan comes in two colors, there’s black and white. We have the black model here, which looks pretty nice on our desk. However the white one is pretty good looking as well. It’s made out of plastic, but definitely does not feel cheap. It feels and looks pretty premium. The sides, top, and bottom all have a matte finish while the edges and the Tronsmart logo use a glossy plastic material. Not enough there to really make it a fingerprint magnet – although you likely won’t be picking up the Titan much to take it places, like you would a smartphone or tablet. Additionally, there are four rubber feet on the bottom. This is to keep the Titan from really moving around much on your desk or any other surface. 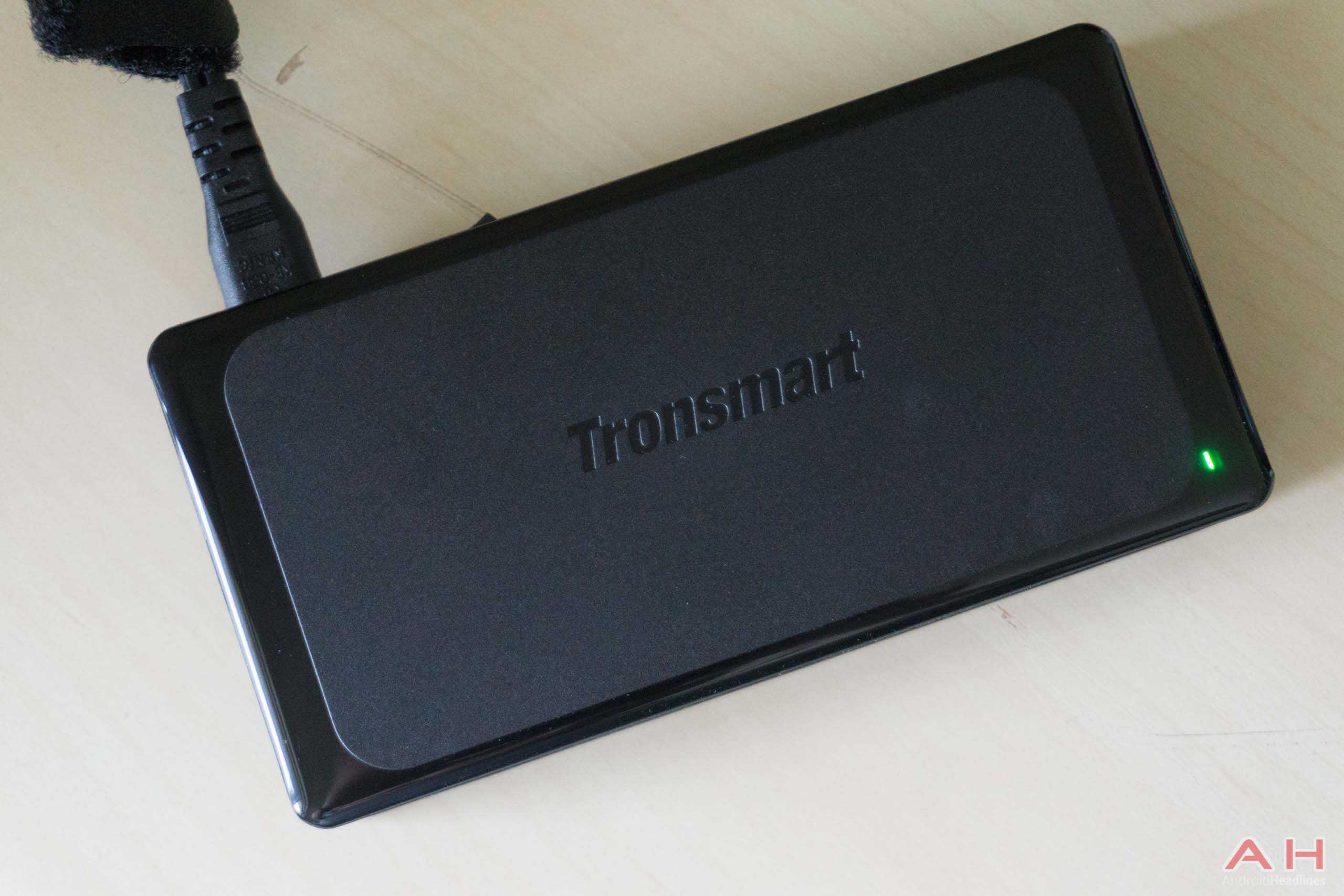 Titan also has a LED light in on the top in the lower right-hand corner. This LED light shows green when it has power. When it’s plugged in and turned off, the LED is turned off. And of course when there’s no power at all, the LED is also turned off. 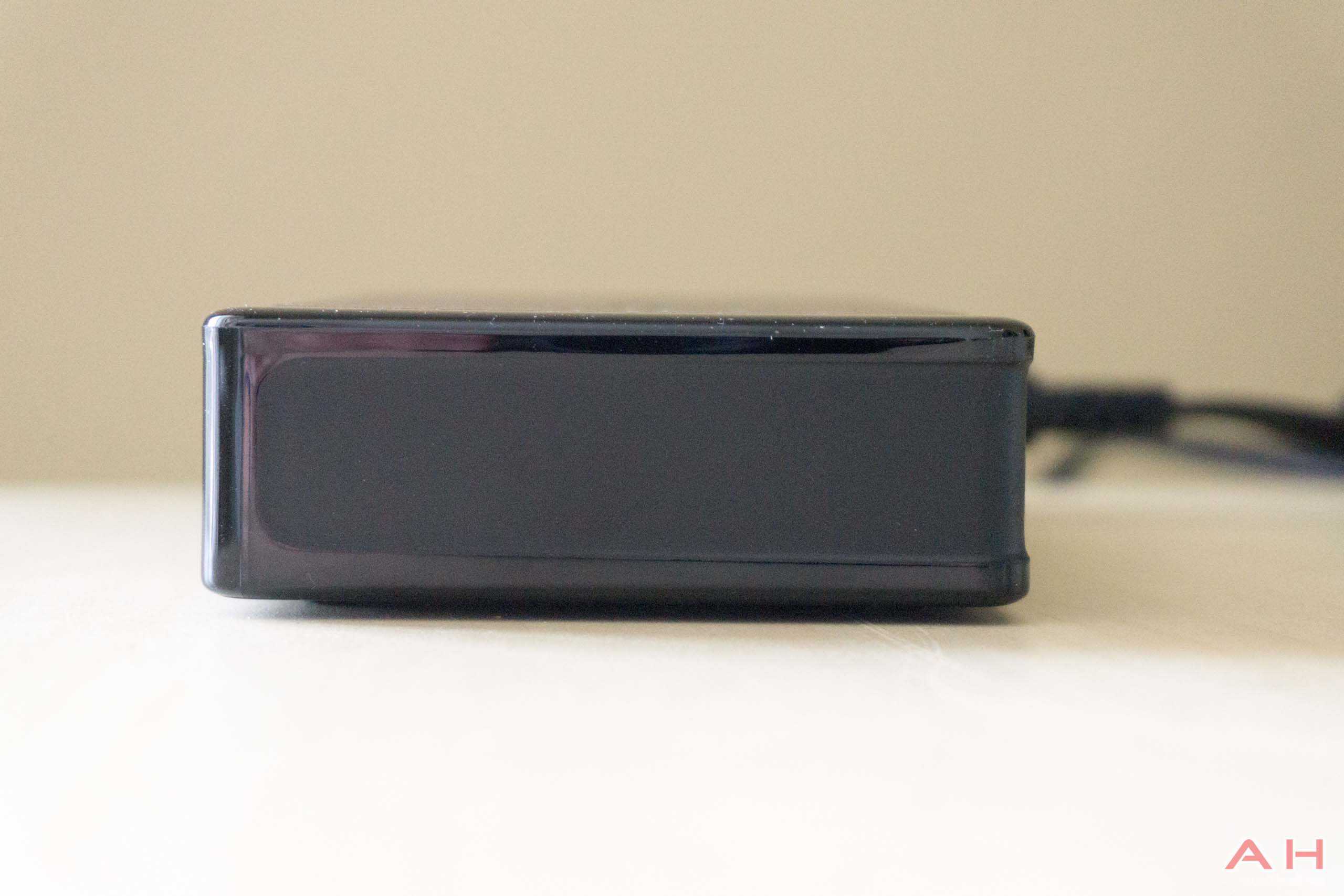 The Titan isn’t as compact as some other charging hubs that are out there on the market right now. It measures in at 6.25 inches x 3.25 inches. While the thickness is over an inch. The larger size is likely due to the extra power needed to charge five devices at once at Quick Charge 2.0 speeds. It’s not really a big deal, as it still doesn’t take up a whole lot of space on my desk.

While Titan isn’t as small as other USB hubs out there, it’s still quite portable. I’m able to throw it into my backpack when going on long trips and it doesn’t take up much space either, definitely good when you’ve got all sorts of other tech in a bag (like a camera, tripod, power banks, tablets, etc). And with it having five ports, it means I can charge my smartphone, tablet and smartwatch and still have two ports left, in case someone else needs to charge their device(s) as well. Or in case I have something else that needs charging. And with USB Type-C right around the corner, soon I’ll be able to plug in my laptop to the Tronsmart Titan. A great product to take on trips, especially when hotel rooms don’t always have enough outlets, or outlets where you need them. 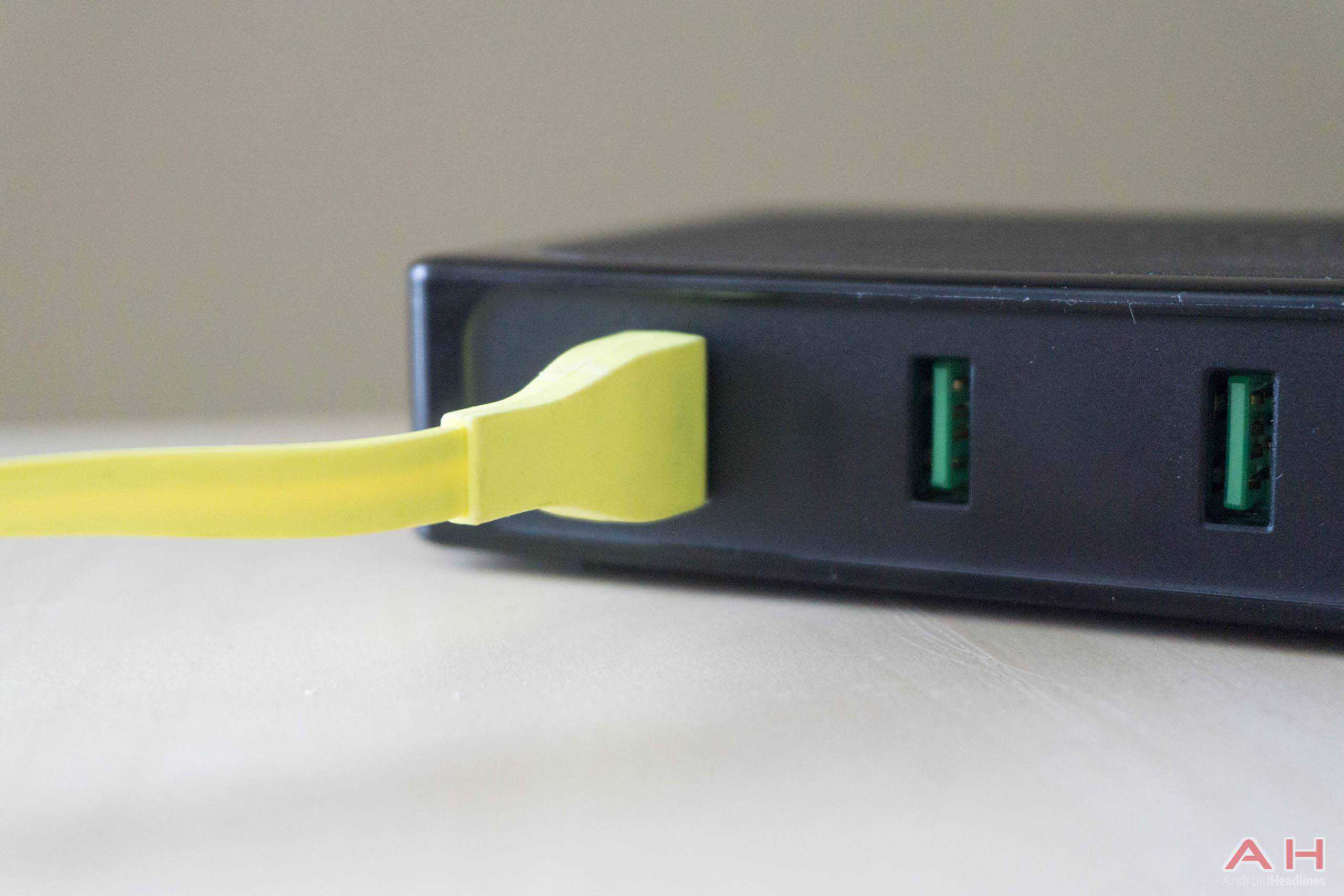 Quick Charge 2.0 is also cross-compatible with other fast charging that Samsung has and Google used in their Nexus devices. While I don’t have a device that is technically Quick Charge 2.0 certified, I do have the Nexus 6P which does charge quickly. Plugging in the Nexus 6P to the Titan (using the USB Type-A to Type-C cable Google included), I am able to see that it charges at about the same speed as plugging it into the USB Type-C wall charger that came with the Nexus 6P. Both of which can fully charge the Nexus 6P in a little under 2 hours (depending on whether or not I am using the device while it’s charging). This means that the Titan works just how it should, and charges your smartphone quickly.

Now, because the Titan does support Qualcomm’s Quick Charge 2.0, doesn’t mean you can only use it when you have a Quick Charge 2.0 device. Luckily, Qualcomm built Quick Charge, 1.0, 1.5, 2.0 and 3.0 to be backwards compatible. So the charger will talk with your phone or whatever gadget you have plugged in, to see how much power it can handle without damaging the device. A great idea, as not everyone has a smartphone that uses Quick Charge, but everyone would love to charge their smartphone quickly. 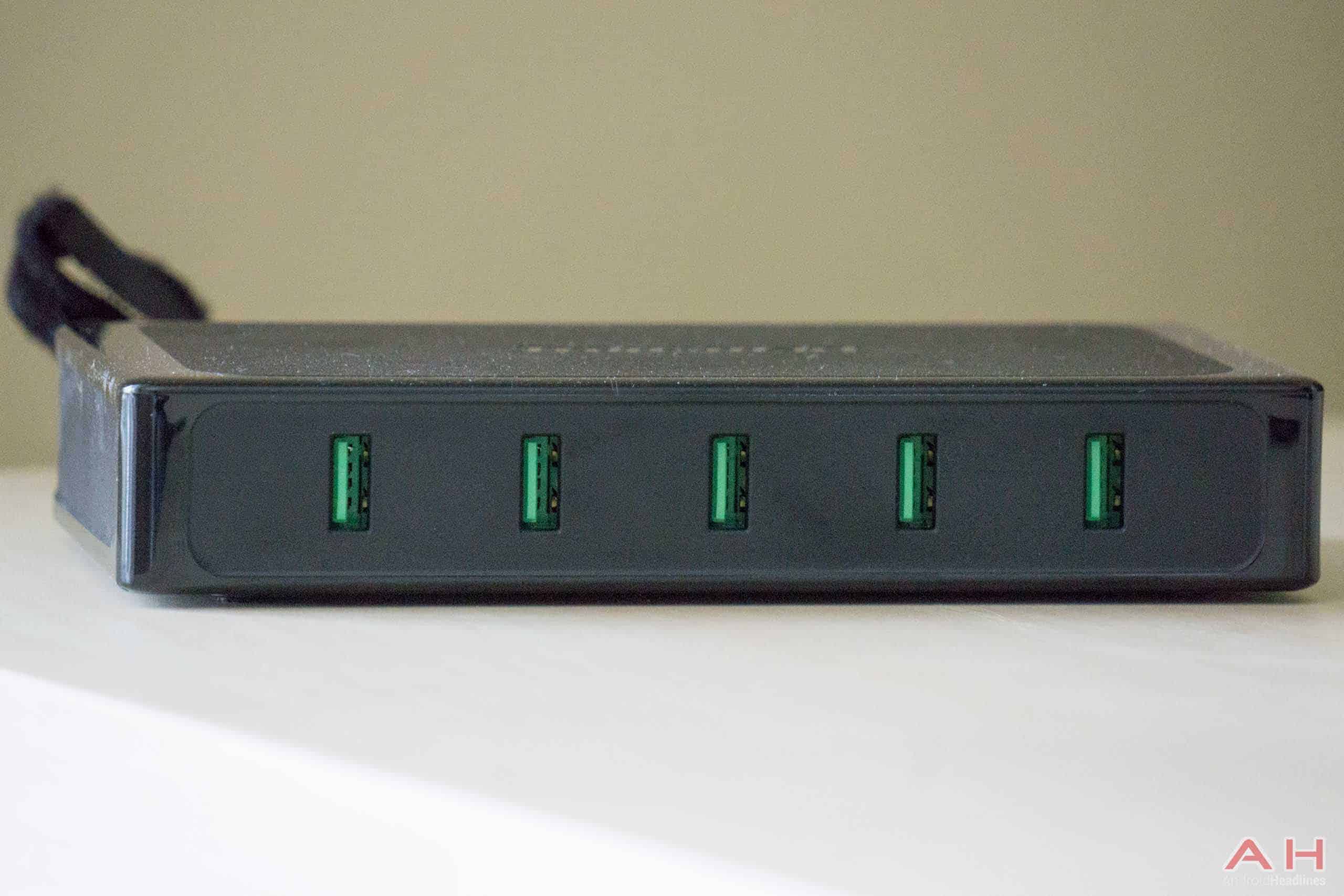 The Tronsmart Titan is a really well built USB Hub charger, and has performed very well for us. It was also the first USB Hub charger that features Quick Charge 2.0 technology on each port – which you can tell by the green coloring in the ports. The Titan retails for about $37.99, but is it worth that price? Yes and no. This is going to depend on your needs. While I only have a few devices that use Quick Charge 2.0, having 5 ports that support it mean I can plug my smartphone into any port and it’ll still charge quickly. However USB hubs with just two of five ports having Quick Charge 2.0, is much cheaper. So if you are looking to get this to charge everyone’s smartphone in the house, then yes it’s a good buy. Otherwise, you may want to look at some of Tronsmart’s other USB hubs, which they have plenty available.