It’s not every day that we review something that could be considered more of a toy than a gadget, but every now and then something so cool comes along that the mold must be broken for it.  At CES 2016 in Las Vegas we met with MOTA at their booth to discuss some upcoming products, including that super elusive smart ring and a few of their newer drone models.  What we walked away with was one of their super unique tiny drones, one that not only fits in the palm of your hand but also inside the remote itself for easy storage.  What’s unique about this drone isn’t just the way it’s stored, it’s the incredibly small size and stature of it all while maintaining control as you would expect of a drone. 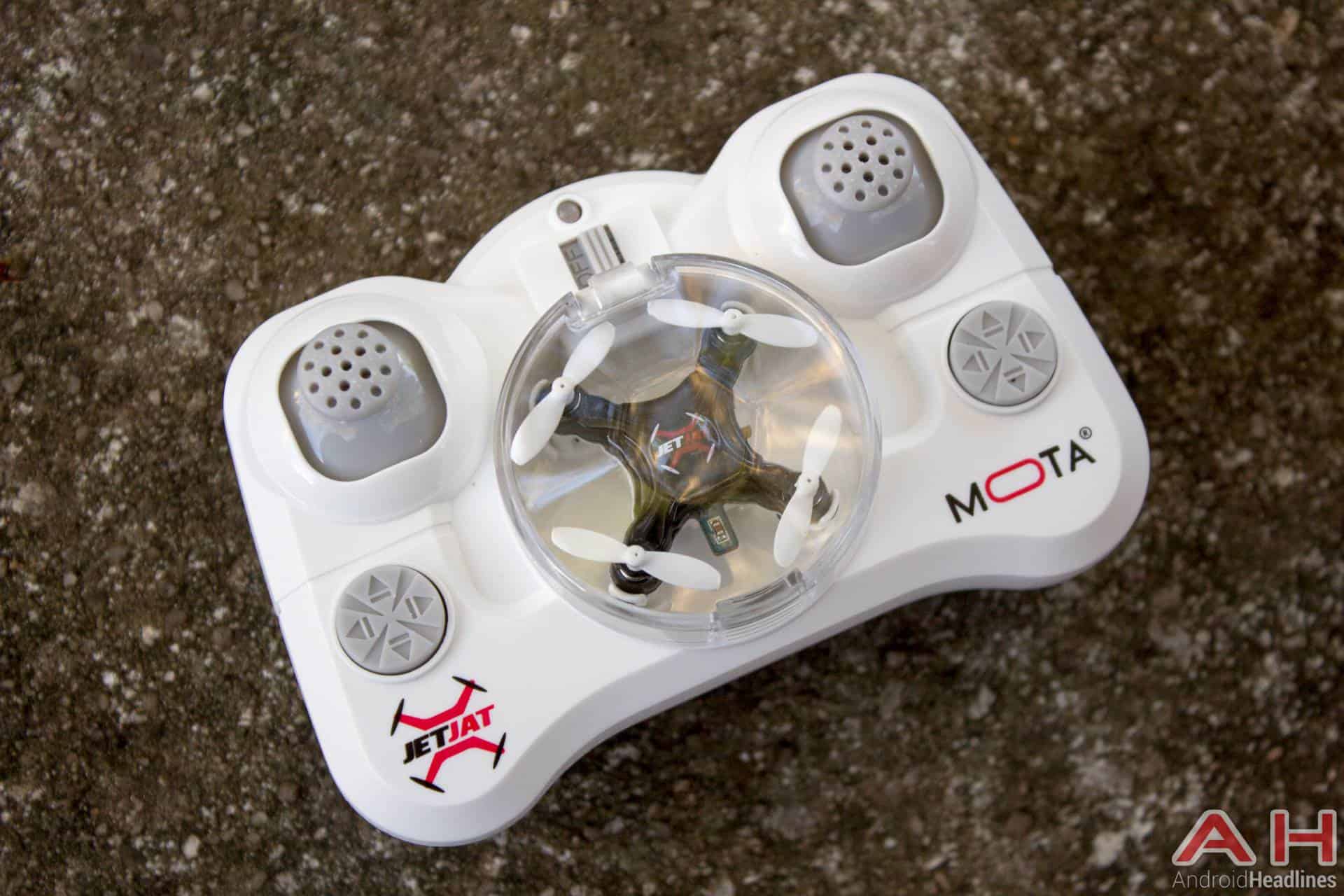 Let’s take a look at the controller first.  This is more or less what you would expect of a drone controller; dual joysticks and a few buttons to adjust trim to keep it stabilized if need be.  The controller itself feels great in the hand and while it’s a tad small it doesn’t cause issue.  The remote is powered by 2 AAA batteries stored under the back hatch, and most uniquely the controller has a small compartment in the middle for storing your drone.  Because it’s so small and light this is the easiest way to tote your drone around, but don’t forget the charging cable as it unfortunately won’t fit inside here.  This seems to be a bit of a mis-step in design because, as you’ll see in a bit, the battery life on the JETJAT Nano isn’t exactly long.

Next up is the drone itself, which looks like an extraordinarily small version of a standard quadcopter, just without all the bumper protection around its blades.  Inside the main base is a rechargable Li-Ion battery that’s balanced for accurate flight, and you’ll find a charging port protruding from the center of one side of the body.  This port is light enough so that it doesn’t affect the balance of the drone either, and there’s also a single on/off switch just above the battery on the side as well.  On each of the four arms resides small plastic blades tailored for flight.  Each of these blades is removable and is designed both to be easily replaced when broken or just to remove any hair and other particles that may have made their way into the mechanism.  There are a pair of blue lights at the front of the drone and a pair of red lights at the back It’s difficult understanding just how small this is until you see it with a reference object.  I could easily fit two of these in my palm without issue, and a third one would likely only protrude off the side of my hand by a few millimeters.  Because of this size there are limitations to what it can do, if for no other reason than the incredibly light 11.3 gram weight of the unit.  That means no cameras or other fancy equipment on this drone, just good old fashioned RC fun.  Charging the drone is simple with the included USB charger, as you can plug it into any computer or USB outlet to charge the unit.  Just make sure not to lose this one though as it’s a proprietary circuit board connector on the drone side and will probably be more difficult to replace than it’s worth.  Plugging the USB cable into a port will illuminate a light found inside of the USB portion of the cable, and when the charging is done 20 minutes or so later the light will shut off. 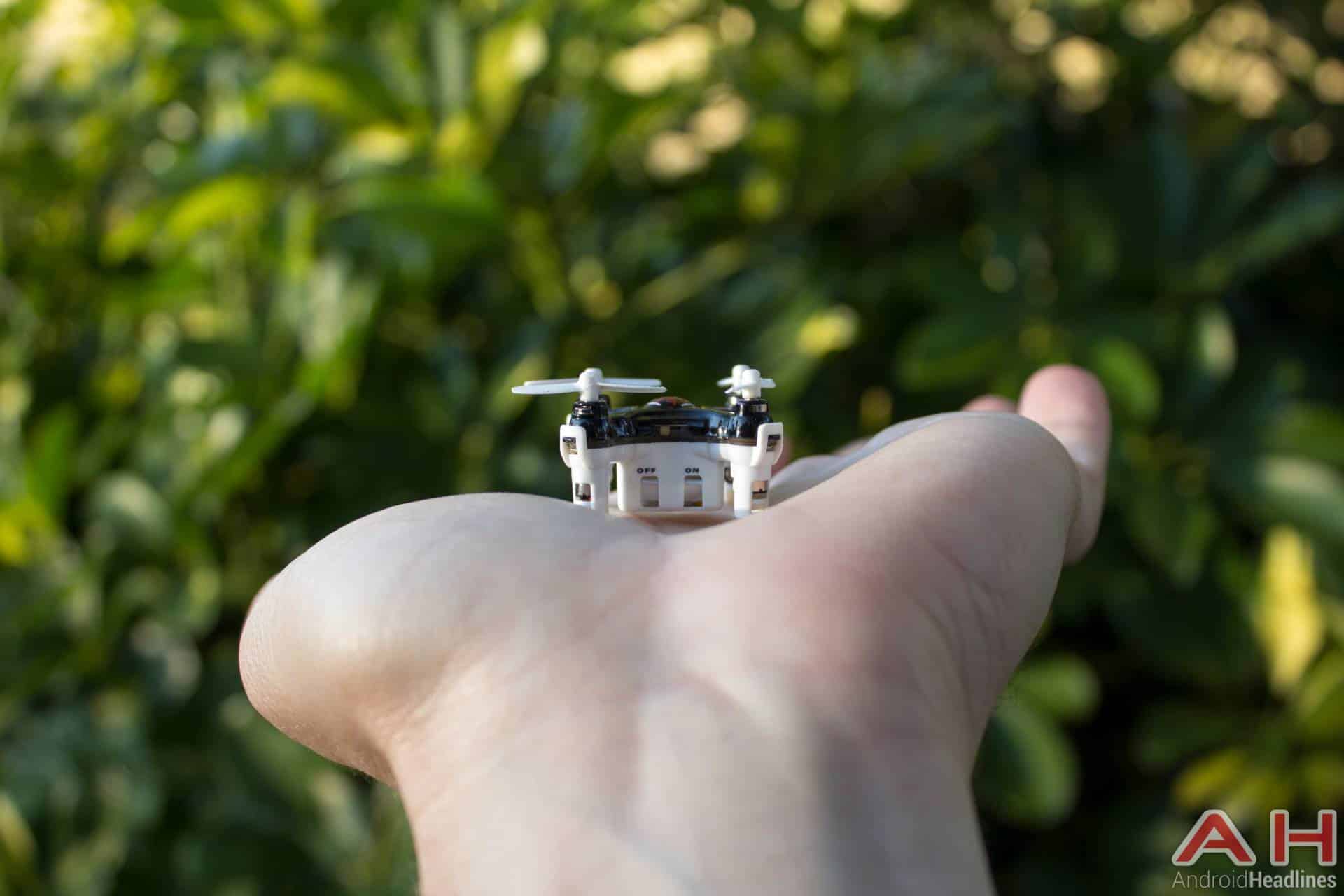 Pushing the left joystick forward gives throttle while pulling it back slows the blades.  Pushing the left joystick to the left or right will rotate the drone 360-degrees for more accurate turning movements.  The right joystick is all about 2D movement on the X and Y planes.  Remember from before that the two blue lights indicate the front of the drone while the two red lights indicate the back.  Steering the drone takes a bit of getting used to for sure, and it would be much easier if the controller had colored markers showing that blue is forward and red is backward, as it’s a bit difficult to remember at first.  It only took me two or three full-charged flights to get the hang of everything, so it’s not much of a learning curve on the default beginner mode.

Those looking for some more advanced flight modes with more control can click the left stick which will cycle through beginner, intermediate and advanced.  Clicking the right stick followed by a direction will flip the drone for aerial stunts, but is quite difficult to get the hang of.  Most of the time I found myself crashing the drone into a wall or the ground after this sort of flip as it was difficult to quickly stabilize the drone in time.  Flight speed is incredible and makes the drone look more like a dragonfly or some other large flying insect because of its speed and precision.  It takes fractions of a second for it to get off the ground if you full throttle it, but it’s far more accurate if you slowly bring it up and stabilize the unit first. After a few flights I was able to successfully glide the drone in the air, hover it over a surface and land it without issue.  I could never quite master landing it on something as small as a hand, but a table worked just fine.

I did run into some snags though when flying, namely in the precise flying department.  While the drone flew straight and true out of the box, prolonged flights made it more and more inaccurate in terms of taking off straight up.  I found that taking off slowly and holding the stick in the opposite direction of where it was leaning helped a lot, and of course using the trim buttons located below the joysticks will make a more permanent difference.  These are extremely difficult to use though, and it takes a lot of trial and error to get the trajectory fixed.  Performing a “factory reset” will also help, just keep the drone on a flat surface and press the left joystick to the bottom left and the right joystick to the top left, holding them for 3 seconds until the drone’s lights flash and turn solid again.

Flying the unit outside was very doable so long as there’s not a lot of wind, as the unit is far too light to fly in almost any kind of wind at all without being completely overpowered.  Flying indoors is much more suitable under most conditions. 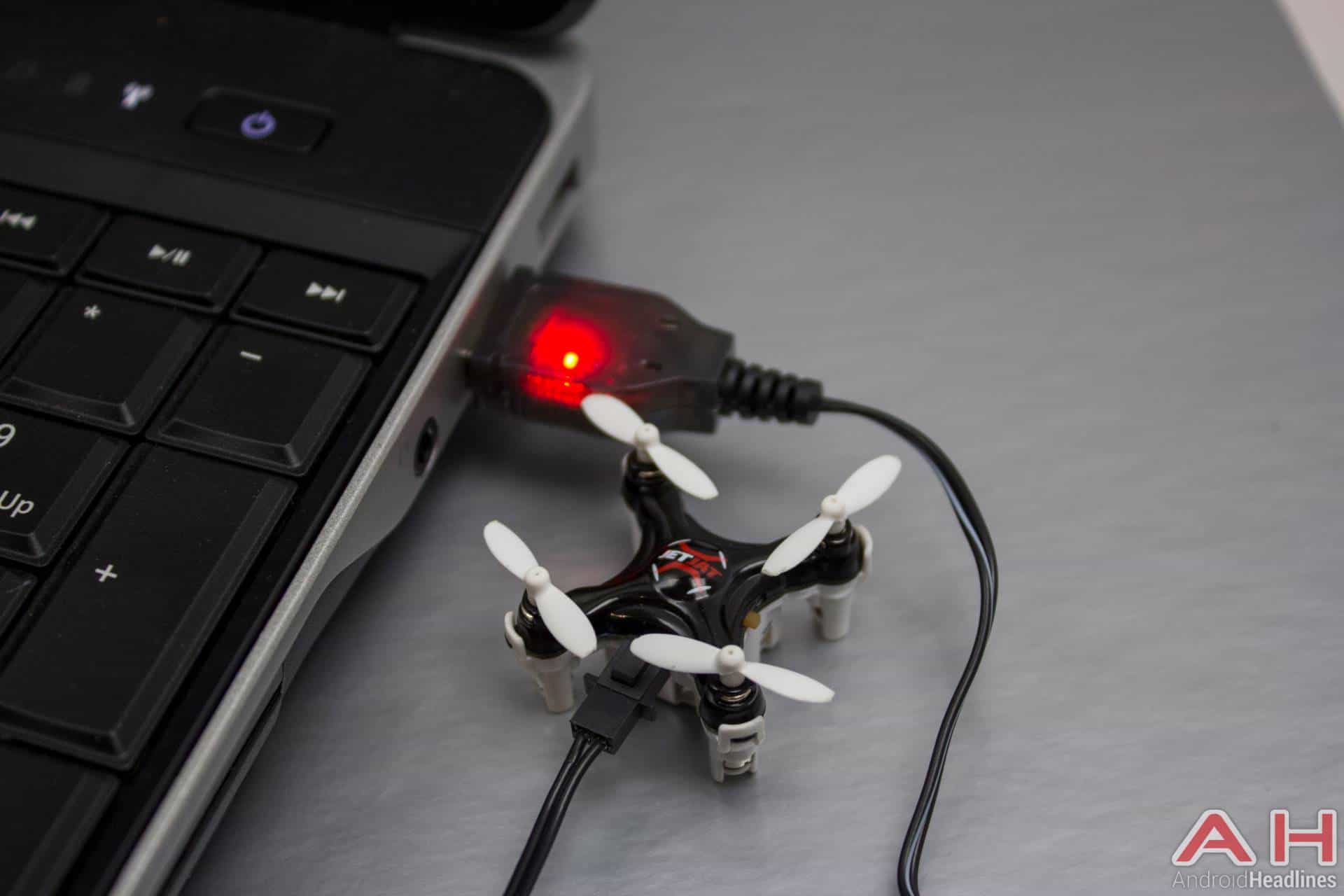 Since the remote is powered by 2 AAA batteries you’re looking at pretty insane battery life on that, and you’ll likely not have to change these out for months or so at a time.  The drone is a very different story though, as it’s rated for 8 minutes of flight time and I found that to be pretty much dead on accurate.  There were times when it would last slightly longer than this but no more than a minute or two at maximum.  Charging takes 20 minutes or so, which is unfortunate since it’s such a short flight time.  Aside from the limitations that the size and weight imposes this is surely the largest negative aspect of the drone.  There’s no way to make this battery life any longer either because of the size and weight requirements, so what you see is what you get.

The unit itself is quite durable and has survived plenty of smacks against walls, drops from several feet onto concrete, and falls that would break most devices in a split second.  The propellers themselves, made of flexible plastic, have also survived plenty of encounters with metal, concrete and other hard objects like trees and have come away with only minor scrapes.  Once these scrapes become too large they will hinder the ability of the drone to fly well, so it’s best to replace these once they get too beat up.  The body itself never seemed to sustain any kind of damage though, and I was incredibly impressed with the durability of the build here.

Because of the design of the rotors it’s quite easy for hair to become entrapped within the propeller.  This is obvious when the craft violently swings one way by itself without you doing anything.  Popping the propeller straight off is the easiest and most care free way to remove the hair, and all you need to do is pop the propeller back on to get going again.  It’s a great design that makes maintenance simple, and there’s four extra propellers included in the box for when you do have to eventually replace one of them. 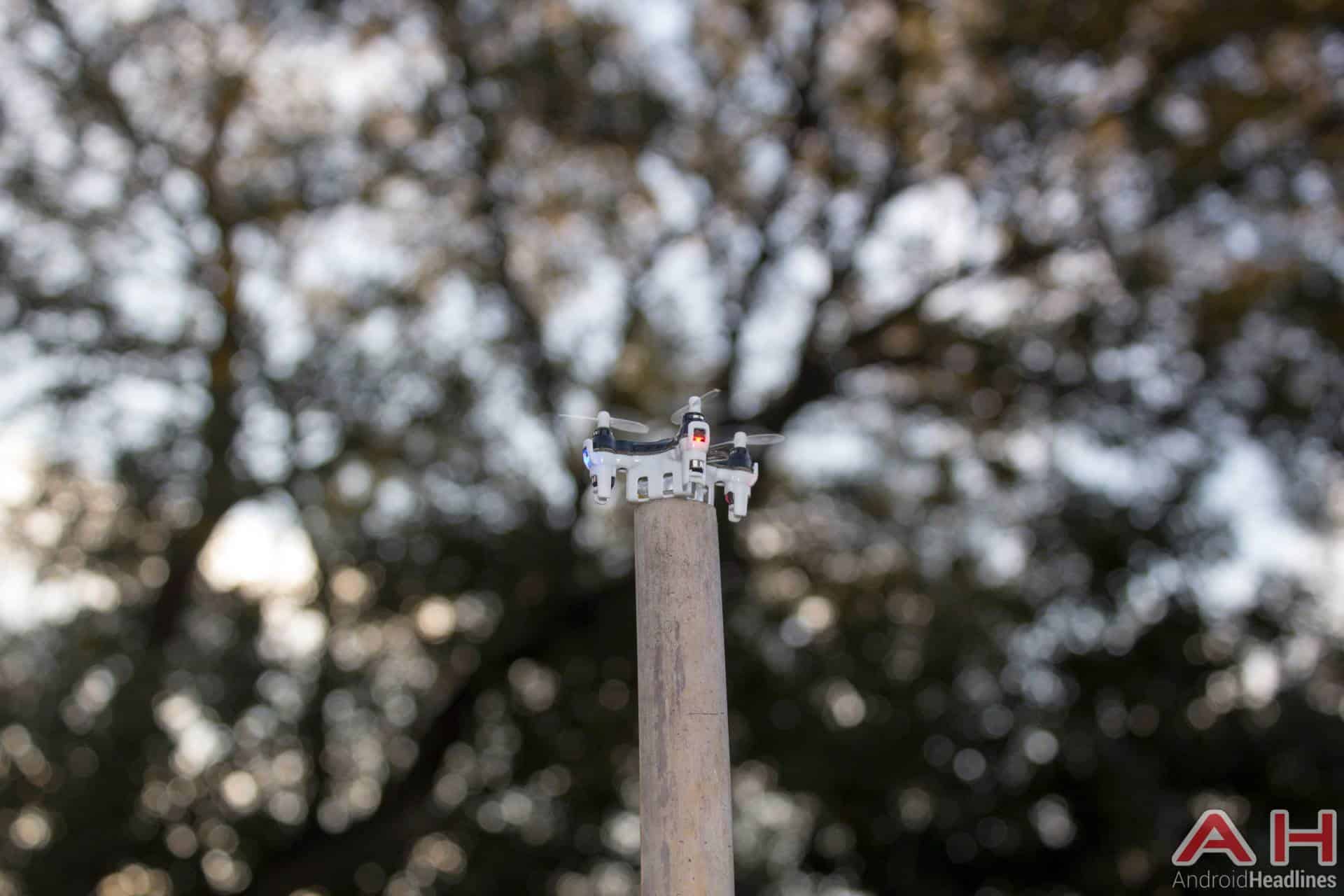 For $32 you’re getting a drone that’s incredibly portable, but without simple storage of the USB charger you’re going to run out of battery quick.  Still this is a fun toy, no doubt, and while it won’t link to your smartphone or take video when flying high, it will certainly give you a few minutes of fun when used.  My 2 year old has a blast when we play with it, and it’s likely that children are the ones that will get the most fun out of this in the long term.  Considering this isn’t a dangerous drone at all and there’s no danger of harm from the propellers, that may just be the best way to utilize such a small quadcopter anyway.