Samsung Galaxy S7 is, next to Xiaomi Mi 5, the most leaked handset in the last couple of months. Samsung's upcoming flagship has been mentioned quite often in various rumors and leaks lately, and it seems like the device will arrive during MWC in Barcelona next month. The Galaxy S7 Edge will probably launch next to it, and some reports are claiming that the Galaxy S7 Edge+ will also going to be introduced next month.

That being said, both the Galaxy S7 and Galaxy S7 Edge have popped up on AnTuTu lately, and the Galaxy S7 has now surfaced on GeekBench as well. Keep in mind that we're looking at an Exynos 8890-powered variant of the device here, and according to the benchmarks, the device was able to hit 1,873 points in the single-core test, and 5,946 in the multi-core test. GeekBench also reveals that the handset will pack 4GB of RAM, and that Android 6.0.1 Lollipop will come pre-installed here. This actually goes hand-in-hand with all the previous info we've seen, not only in rumors and leaks, but other benchmarks as well.

Previous leaks said that the Galaxy S7 will feature a 5.1-inch QHD (2560 x 1440) Super AMOLED display, 4GB of RAM and various internal storage options. Two variants of the Galaxy S7 will be available, one will be powered by the Exynos 8890, and the other one will pack in the Snapdragon 820 SoC. The 12.2-megpaixel rear-facing camera has been mentioned (BRITECELL?), and a 5-megapixel shooter will probably going to be available up front. Samsung's TouchWiz UI will be available on top of Android 6.0.1 Marshmallow (unless Samsung decides to rename their skin), and you can expect this handset to resemble Samsung's flagships from last year (metal + glass design), especially the Galaxy Note 5. The physical home button will be placed below the display, and inside of it, you'll find a fingerprint scanner. That is pretty much it, the handset is expected to be announced next month, and I don't doubt we'll see more rumors / leaks before then. Stay tuned, we'll report back as soon as something interesting pops up, as always. 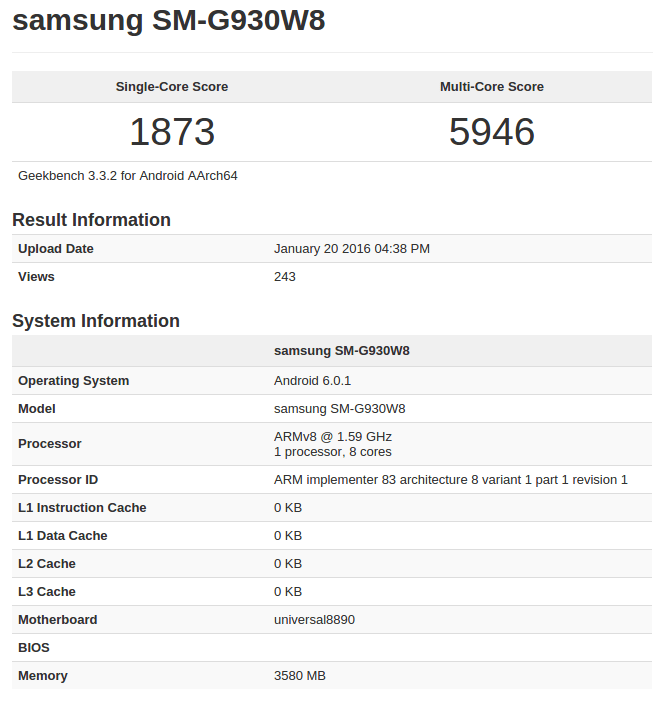