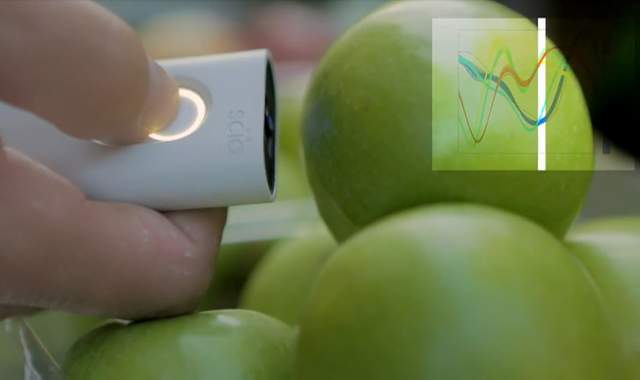 Over the years, Samsung have both installed and used in a new way a number of different sensors into their smartphones. The Samsung Galaxy S3 introduced “SmartStay,” whereby the device would keep the screen on when the user was watching the screen. We’ve also seen heart rate and ultraviolet sensors, to pick on three examples – but we’ve news of a sensor that Samsung have yet to bundle into one of their flagship devices: a molecular scanner. These scanners are not by themselves new technology, but condensing the technology into a portable, handheld unit. These units can currently be used to help identify for example the sugar content of a slice of cheesecake, the fat content of the cream that’s about to go into your coffee, or if the ibuprofen you’re about to take for your headache is the genuine item or not. Dror Sharon, the Chief Executive Officer of Consumer Physics, the Israeli start-up that is developing a handheld molecular scanner believes that the technology will open up a new branch of accessible knowledge.

Consumer Physics’ SCiO scanner uses near-infrared light to analyse reflected light energy from objects. From this information, it computes their unique molecular “fingerprints,” which is then referenced through a database to provide the user with all sorts of information about the object. The SCiO scanner has its origins in a successful Kickstarter crowdfunding scheme, which ran in 2014, and has been demonstrated across the world. However, Consumer Physics now wish to take their technology – which is able to produce something not too dissimilar from the much-loved tricorder from the Star Trek science fiction series – to the next level: shrinking it down to fit into smartphones. As part of the process, Consumer Physics are selling the scanner on their website together with the mobile kit: more than a thousand developers, entrepreneurs and businesses have received their equipment. In effect, this is making the effort something of a collaboration and developers are already meeting to test and explore possible uses of the technology. Consumer Physics’ ideal is to create a platform allowing developer customers to innovate on uses of the technology whilst contributing to the underlying substance database. Dror said: “We’re looking for developers, people with access to special materials that can help us scan and expand the database of the physical materials in the world. We might not have access to specialty gemstones, however there are people that do have access, there are people that measure gemstones all the time. So they can build a database and if they so wish to do, which we hope they will, they will share it with the rest of the world and suddenly you and I at home, if we get a gemstone, we can analyse it, know its quality, understand the different types. That goes for foods, for pharmaceuticals, for anything.”

We’ve no word if Samsung have ordered or received any molecular kits, but Consumer Physics’ ambition is to put their technology into every smartphone by 2021. The technology will be small enough to fit into not only smartphones and tablets, but wearable devices too such as smartwatches. In the words of Dror, there were 1.5 billion smartphones made in 2015 and the company do not need many in order to obtain a toehold in the industry.