Over the last couple of years, we’ve seen a ton of various wearable offerings being released to the market. Various tech and non-tech companies have released such products, and tradeshows like CES are actually perfect for announcements of such devices. Well, we’re here to talk about one such product released by ReliefBand Technologies called ReliefBand. This wearable is rather innovative and interesting, let’s see what it has to offer, shall we.

The RelifBand is an FDA approved devices which can be used for the drug-free treatment of nausea associated with motion and morning sickness. Sounds interesting? Well, it is, as long as the drugs are out of the question and it works, of course. This device, according to the company, can ‘treat, alleviate and help’ with conditions, and not only monitor them. The company has revealed that the ReliefBand will be released in the first quarter of this year, but we still don’t know when exactly will that happen. The device was in a beta test during Q4 2015, and it seems like the test was quite successful.

Now, let’s get into more details on how this device works. ReliefBand uses RelifBand Technologies’ patented tech in order to function. It uses ‘accurately programmed pulses with highly specific waveform, frequency and intensity to stimulate the median nerve on the underside of the wrist’. Now, this activity is referred to as ‘neuromodulation’, and it uses body’s natural neural pathways in order to block the waves of nausea caused by your stomach. “With 70% of women experiencing morning sickness during pregnancy and more than 60 million people suffering from motion sickness, ReliefBand is fulfilling a very large unmet need. With wearable technology becoming widely accepted, the time is now right to bring this clinically proven technology that has been developed over decades to a device that people can buy without a prescription,” said Nick Spring, CEO of ReliefBand Technologies.

ReliefBand Technologies have actually raised $5 million in venture capital funding in order to market and sell this device, and it will be available for $89.99 soon. The company will unveil commercial units of the device at CES January 6-9 at the Sands Expo Center, so if you’re attending, that’s where you can find them. 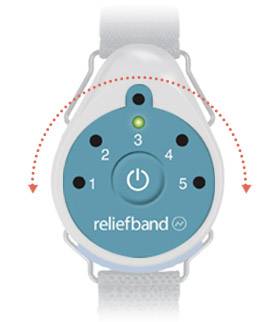