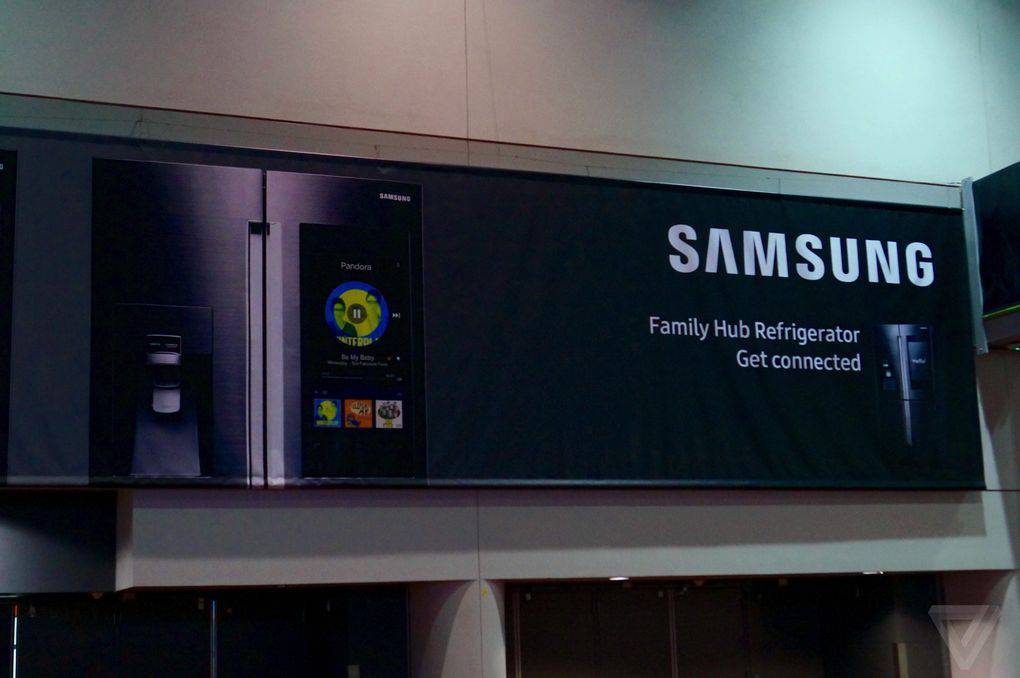 CES doesn't officially start until Wednesday, although the press day is on Tuesday. However, many are already making their way into Las Vegas to get things started for the biggest consumer electronics show of the year. The show floor is not quite ready yet, in fact it looks like there's still quite a bit of work left to be done. But, there is a poster hanging up, showing a smart fridge from Samsung that has a big touch screen display on it. So we should see that announced on Tuesday at Samsung's press conference (which we'll be covering live as usual).

The poster doesn't really tell us much, so we'll have to wait for the announcement to get all of the details. But the right door has a pretty large touch screen built into the refrigerator. And on the poster it says "Family Hub Refrigerator. Get Connected". It'll be interesting to see what Samsung's plans are with this refrigerator and how realistic it might be. We've seen some crazy things come out of LG and Samsung at CES before, in regards to appliances. Anyone remember that LG washer machine last year that had a second washer machine in the drawer below it?

It appears that the display on the refrigerator here might be running Android, again that is not confirmed. However it could be running Tizen or another operating system (our bet is on Tizen). It appears that you can create grocery lists from this display, as well as check the calendar and music that's playing. Being able to create a grocery list at the refrigerator that can then sync with your smartphone, would be pretty neat. Not to mention convenient. However, being able to adjust what's playing on your speakers in the house, maybe a bit over the top there.

CES 2016 isn't just about mobile technology like smartphones, tablets and smartwatches. It's about all electronics, so we'll see new TV's, computers, refrigerators and so much more announced and on display at CES this coming week. You'll want to keep it locked to Android Headlines, as we will be on the ground in Las Vegas shortly, covering everything that Las Vegas and CES has to offer this year.