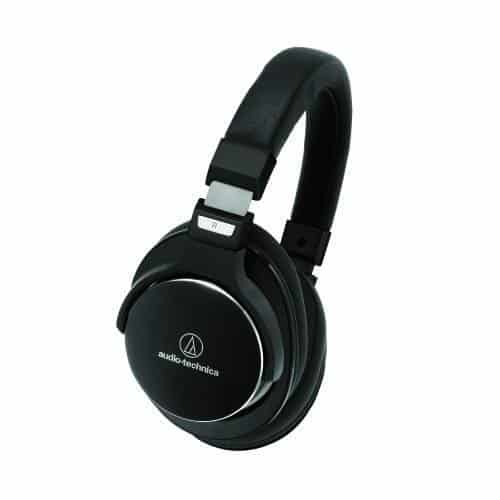 Audio-Technica, the firm that many of you will be familiar with for producing the excellent ATH-M50x is exhibiting this year at CES 2016, and they didn't come empty-handed. The Japanese firm might be best known for the M50x, which is often referred to as a gateway-drug into the world of high-end audio, but they have another well-known pair of headphones. The ATH-MSR7 are a popular pair among those looking for a more balanced sound signature, and this year they're upgrading the line with a noise cancelling option as well as a new pair of Bluetooth headphones.

Starting with the ATH-MSR7NC, Audio-Technica have kept the formula of the original mostly intact, but added noise cancellation features. How noise cancelling works is by using microphones to detect how much background noise there is and then inject some white noise into your music or signal from your device in order to mask it. It works pretty well in a lot of headphones, and Audio-Technica have said that by putting the microphones on the top of the ear cups, there won't be any drastic changes when the wearer moves their head and so on. Just like the original version of the MSR7 this version features 45mm drivers that feature "exclusive lightweight, responsive voice coils and diaphragms" as well as Audio-Technica's acoustic resistors to provide more accurate and deeper bass response. The noise cancelling feature on these will last for 30 hours at a time via a rechargeable battery. It appears that for now at least, these will only be available in black and will retail for $299.99 later this year.

Moving on to the wireless side of things, and Audio-Technica is introducing their new ATH-SR5BT which will be available in black as well white. Featuring similar 45mm drivers to the MSR7, these promise a frequency response of 5 Hz all the way up to 40,000 Hz which is an impressive specification for a pair of portable cans like these. There's an omnidirectional microphone built in to the ear cups of these, as well as controls for sync, play/pause, skip and volume control. Charged over USB, these promise 15 hours of listening time on a single charge and can easily be paired using the NFC chip found in one of the ear cups. These will retail for $199.95 while the same headphone sans Bluetooth will be available for $149.95 and all three models will be available starting April of this year.