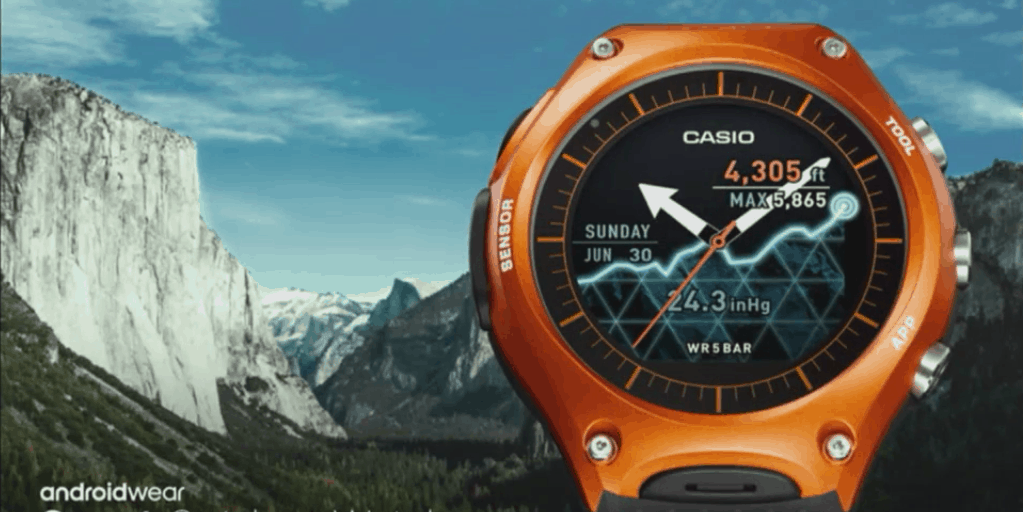 Now that Android Wear is entering it's third-year being on the market, having first launched back in Summer of 2014, more partners are starting to jump onboard. Huawei and Motorola might be the best name technology firms out there for Android Wear smartwatches, we've recently seen the illustrious TAG Heuer jump onboard with their $1,500 Android Wear watch and Fossil, with the Q Founder. Casio, a name that many match with rugged and fully-featured watches like the G-Shock range looks to be finally getting involved. The WSD-F10, also known as the Smart Outdoor Watch, has been spotted at CES 2016 and appears to be the company's first running Android Wear.

The Smart Outdoor Watch is quite obviously a more rugged affair than the majority of Android Wear watches out there, and it's more for the outdoors-y folk out there. While Android Wear will of course act just as it does on the likes of the G Watch R or Huawei Watch, Casio have added in some fitness apps as well as a gamut of custom watch faces that are both good-looking and functional. Apps included will be ViewRanger, Runkeeper and MyRadar for weather. Interacting with Android Wear and certain apps will be a little different, as well as the capacitive touchscreen there are three buttons including the usual power button as well as TOOL and APP buttons. Presumably, these will work with the Casio watch faces as well as some apps while wearing gloves or you have wet hands.

There's a 1.32-inch display on the WSD-F10 and it's a 320 x 300 affair, complete with a flat-tire like the Moto 360. Unlike the Moto 360 however, the device can boast GPS as well as some added battery life. The standard day-plus battery life is touted here, but there's a mode that turns this into a monochrome display to extend the battery life up to a month. If you ever doubted it was the display draining that batter, there it is. This is down to the dual-layer display which has both an LCD and monochrome display included. That, and the MIL-STD-810 spec and 50-meter depth resistance make this latest Casio a little thick and heavy at 93g.

This new offering from Casio should go on sale a little later this year and could cost as much as $500. The official press release, linked below, has all the details but it appears as though Casio is playing quiet on this one for now.