ZTE is one of China’s largest tech companies. This smartphone manufacturer has released quite a few rather interesting devices this year as part of either ‘Nubia’ or ‘Axon’ series. The company’s Axon series is available in a number of regions around the world, but we cannot say the same for their Nubia line of devices. The Nubia Z9, Z9 Mini and Z9 Max sure are interesting devices, and especially the Nubia Z9 which sports no bezel on the sides. These devices have unfortunately not been available for purchase outside of China, but that might change soon, read on.

Before we go any further, it is worth mentioning that Nubia is technically ZTE’s subsidiary. That being said, the company has purchased nubia.com domain name quite recently, and had to splash out $2 million in order to get it. Now, this info has been released through Weibo (Chinese social network), along with an image which looks like ZTE’s teaser for the site. The caption reads ‘2016, wish we could be closer, www.nubia.com’, and there’s also a ‘coming soon’ caption below it. Now, this definitely suggests that ZTE plans to launch Nubia’s international site, considering that only a Chinese one was available thus far. As it’s usually the case, this probably also means that they intend to launch their Nubia devices to additional markets next year, otherwise, they probably wouldn’t bother spending that much money on a domain name.

The Nubia Z9 flagship features a 5.2-inch 1080p (1920 x 1080) IPS LCD display, 3/4GB of RAM and 32/64GB of non-expandable internal storage. This device is fueled by the Snapdragon 810 64-bit octa-core SoC, and a 2,900mAh non-removable battery is also a part of this package. The phone sports a 16-megapixel OIS camera on the back, and an 8-megapixel snapper up front, while Android 5.0.2 Lollipop comes out of the box here with ZTE’s Nubia UI 3.0 available on top of it. The Nubia Z9 is made out of metal and glass, and it’s a really sleek-looking devices, mainly because it has no bezels on the side. We still don’t know if ZTE plans to release their current Nubia lineup to more market, or are they planning to open this site so that they could sell the upcoming Nubia Z10 devices, but we’ll get more info soon enough, stay tuned. 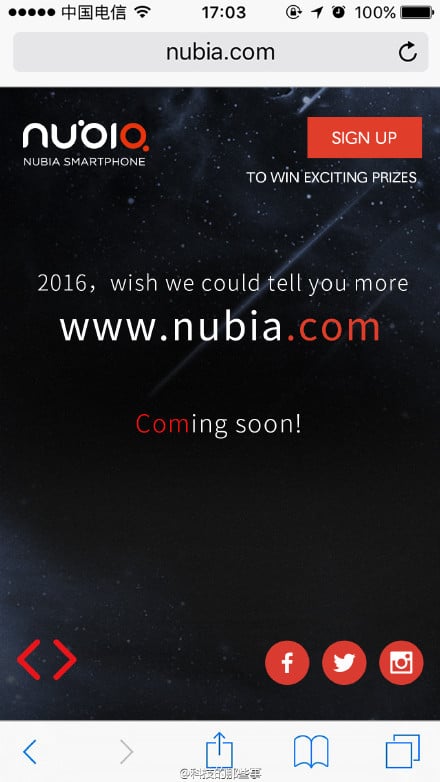