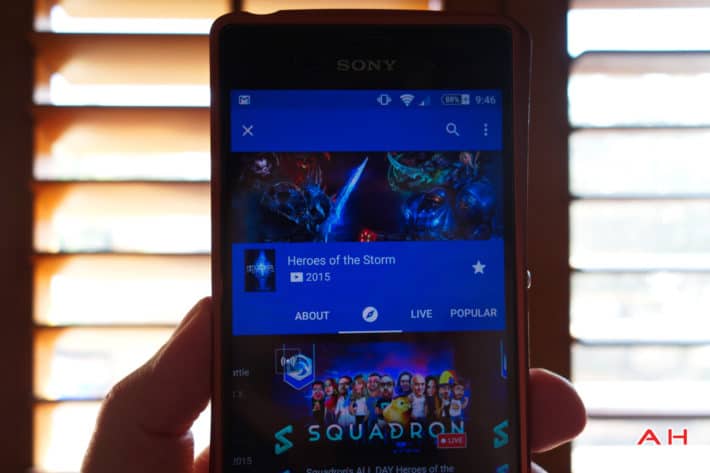 Google just dropped their latest app update for YouTube Gaming, their recently released video game streaming platform that hit the Play Store earlier and the web this year. While YouTube Gaming was already filled with robust features and satisfying user experiences, there is still more that could have been done to improve upon it and Google, as well as the YouTube team, have taken some of those steps with this update to version 1.2 of the application. The update may or may not be live for everyone in the Play Store just yet which is fairly common with app updates as they tend to be staggered, and Google has mentioned that the update should be rolling out to all over the next couple of days. Here's what's new and what users can look forward to once they have their hands on it.

For those that may end up viewing content from YouTube Gaming more on their smartphone or tablet compared to on the desktop platform, the update to the app provides a better and more improved mobile streaming experience overall. Search results have also been redesigned, and now when users search for content, live streams, games, and channels will be highlighted. For new users of YouTube Gaming, the app now has a brand new welcome screen as well as a new series of setup instructions to help walk you through the key details and functions which should make onboarding easier.

Keeping up on additions to the channels you follow also just got simpler, as Google has added in a "notification bell" to alert users when channels they follow or subscribe to upload new videos or come online to live stream content. Other changes in this update include  improvements to the game page explore tab and games being live streamed can now be displayed in the channels tab. There are also a couple of Android-specific updates with this version, as there have been improvements made to the Mobile Capture with a revamped UI and more support for some devices running on Android 5.1 Lollipop. Lastly, Android devices get support for Cardboard VR content, and purchasing sponsorships for enabled creators is no longer just an option available to desktop users. If you're new to YouTube Gaming, you can pick up the app from the Play Store.