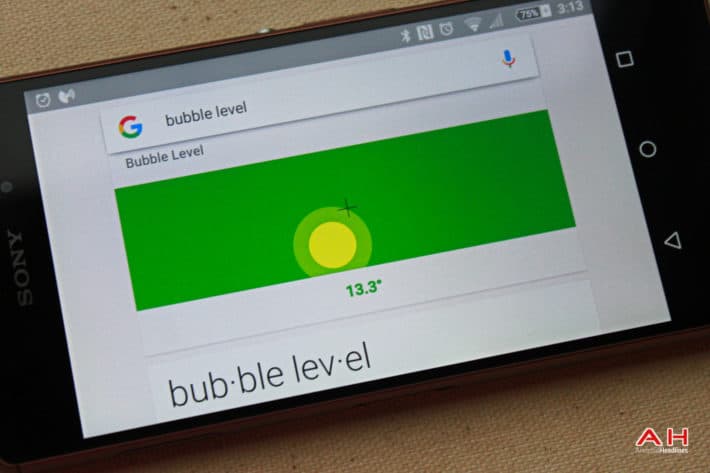 Google has always had a habit of providing users with fun little easter eggs in their products, from the Flappy Bird clone stuffed into Android 5.0 Lollipop and Android 6.0 Marshmallow to a rather tyrannical endless runner only playable when Chrome isn't connected to the internet. In this latest bonus, Google aims a bit more for the useful side. If you're in need of a level and don't happen to have one on hand, you've always been able to download an app from the Play Store, provided your phone has the proper sensors. Google has gone ahead and removed this step, allowing users to get their hands on a level through a quick search.

In the Google app or Chrome on your mobile device, iPhones included, simply type "bubble level" and hit enter. Along with the Wikipedia entry, you'll be treated to a functional bubble level on your screen. Good for quick jobs like straightening a painting, its accuracy is a bit inferior to standalone apps peppering the Play Store and App Store. While not suitable for use on a professional job site or other job where utter precision may be required, you'd likely be better off with a physical level. The feature is, of course, nice to have.

A Redditor by the handle of mkgray, allegedly a Googler, asked Reddit readers to simply "Search for bubble level on your phone!" The comments indicated that it worked and showed the results. For obvious reasons, this won't work on a computer. The LG Nexus 4 and phones running Android 6.0 Marshmallow seem to have some issues getting it to work. Users of other versions on phones besides the Nexus 4 didn't seem to have much trouble getting themselves a handy onscreen level tool. A simple level may not seem like much, but this easter egg is a sign of things to come. As the mobile space grows and transforms, new platforms and increased compatibility are expected. Reddit user bdubble went as far as saying, "This isn't about Android, believe it or not it's not even about a bubble level. It's about a live app being delivered within your search as a relevant result."