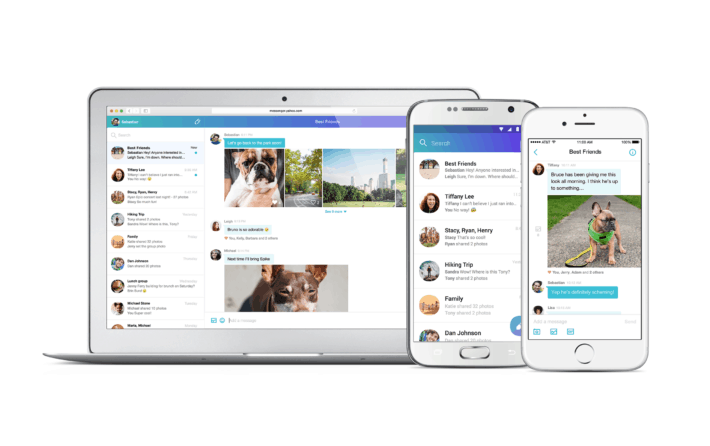 Anyone remember Yahoo Messenger? You likely stopped using it around 2010 or even earlier (all the spam was probably a big reason for that). Well today, the company has reintroduced the service, and is hoping to win users back. Although, they now have a whole lot more competition than they had a few years ago, when Yahoo Messenger was competing with AIM. In recent years, Yahoo has reinvigorated their services and made a few apps that are really useful and popular. Including Yahoo Weather which integrates with Flickr to bring you pictures from around your current location, as well as the weather. There’s also News Digest which brings you the top news twice a day. So that way you can go through your day without getting notifications all day about news breaking.

Now Yahoo Messenger joins that list. Today, Yahoo Messenger has gotten a face lift on Android, iOS and the web. But it’s much more than that. Yahoo has integrated the best of Flickr and Tumblr into Yahoo Messenger (hoping you’ll use their other services as well). The company says that the new Messenger was built for group messaging. The team made sharing, “Unsending” and “Liking” messages, photos and even animated GIFs easy as well as fast. They promise that it is unlike anything you have experienced before. The app is available on the Play Store and Apple’s app store as well as available through the Yahoo Mail client on the web.

On the Photo’s side of things, Messenger takes sharing photos to a whole new level, thanks to Flickr’s expertise. Yahoo says, “you can literally send hundreds of photos at a time and they appear to everyone in the conversation almost instantly.” Messenger doesn’t degrade the quality of the images you are sharing either. Additionally, users can download those images at full quality. Finally, Yahoo says that the app loads images just before you need them. So they aren’t taking up space on your smartphone or tablet.

Yahoo has also added the ability to unsend any photo, message or GIF, quickly and easily. Speaking of GIFs, you can also send those in Yahoo Messenger and they send very quickly. Making for a great experience. You can learn more about today’s update here.