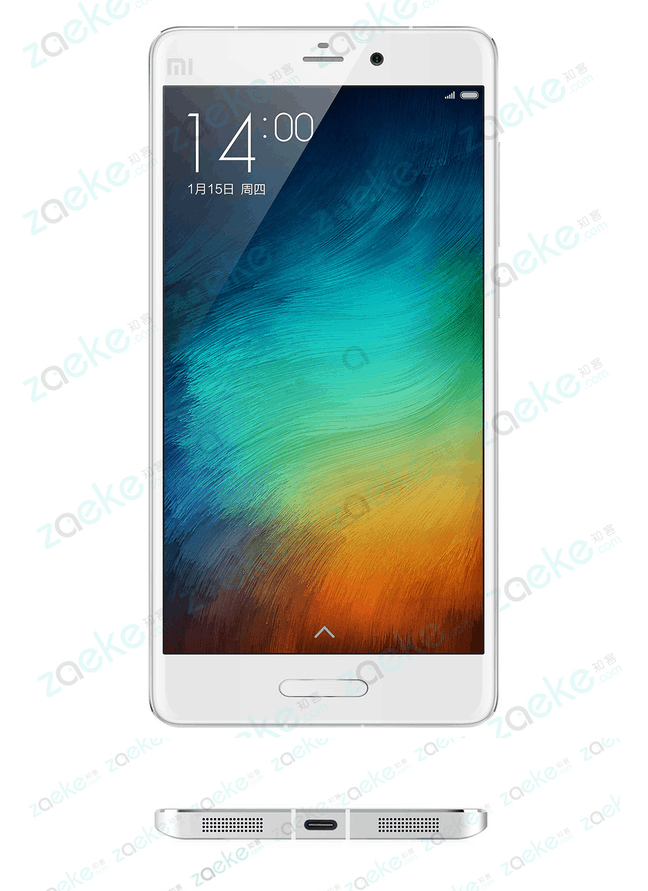 The Xiaomi Mi 5 leaks are dime a dozen lately. We've truly seen tons of various info surface about Xiaomi's upcoming flagship, and the phone won't be announced before January for sure. Xiaomi's CEO has said that he's already using the device, and that it's definitely 'worth waiting for'. Now, the reports say that the phone will launch on January 21st, but we cannot confirm that in any way. Xiaomi is, however, probably waiting for the Snapdragon 820 to become available, so that time frame does fit the bill.

Anyhow, a new leak has surfaced, and this time around we have a new render, spec list and even pricing to share with you. If you take a look at the provided image, you'll get to see what is 'close' to the final build of the Mi 5. The source says that this might not be the final look of the device, but it sure is close to it. That being said, these home button here looks quite odd, and the render which leaked about a week ago seemed more believable, but we'll see. The speaker is placed on the bottom of this handset, and the Type-C USB connector is also visible here. The 2.5D curved glass will be placed on top of the display, and the 3D glass will cover the back of this handset. The fingerprint scanner will be built into the home button, though this home button is quite thin, so… we'll see.

As far as specs go, the Mi 5 will feature Snapdragon 820 64-bit quad-core SoC, according to this rumor, and 3/4GB of RAM will be included on the inside. The device will also pack in 32/64GB of internal storage, and a 5.2-inch 1080p or QHD display will be available up front. Now, the main camera sensor is reportedly the 16-megapixel one, and a 13-megapixel shooter will be available up front. The phone will allegedly pack in a 3,600mAh non-removable battery, and Qualcomm's Quick Charge 3 will also be at your disposal. Android 6.0 Marshmallow is expected to run out of the box, with Xiaomi's MIUI 7 OS installed on top of it, of course.

According to the available info, the 32GB variant of the device will sport with 3GB of RAM and will cost 1,999 Yuan ($308), while the 64GB model will be backed by 4GB of RAM and priced at 2,299 Yuan ($354). That is more or less it, the specifications look quite believable, the device design… well, not as much, but who knows. Stay tuned.