Meizu has announced a handful of devices this year, and the PRO 5 flagship is their greatest achievement. We’re not here to talk about the company’s flagship though, but about a metal-clad mid-ranger they’ve released back in October, the Meizu Metal. Now, keep in mind that this handset is also called Meizu Blue Charm Metal and Meizu m1 Metal, just for reference. Anyhow, that handset actually resembles the Meizu M2 Note quite a bit, especially if you take a look at its internals. Unlike the M2 Note, however, the Meizu Metal is made out of metal and is powered by YunOS, which is not exactly Android per se (forked version of Android). Anyhow, we have some new info when it comes to this handset, read on.

A new Meizu Metal variant has surfaced on GFXBench under the ‘Meizu M57AC’ codename. Now, this appears to be a smaller variant of the Meizu Metal. The listing says it will sport a significantly smaller display than the Meizu Metal, a 4.6-inch panel, which suggest it could be named Meizu Metal Mini or something to that effect. According to GFXBench, the Meizu M57AC will feature a 4.6-inch 1080p (1920 x 1080) display along with 2GB of RAM and 16GB of internal storage. The device will be powered by MediaTek’s MT6753 64-bit octa-core processor along with a Mali-T720 GPU for graphics. The 13-megapixel shooter will be available on the back of this phone, and a 5-megapixel snapper will be located up front. As already mentioned, you can expect Android 5.1 Lollipop to come pre-installed on this smartphone. Android 5.1 Lollipop will come pre-installed on this handset, and YunOS will be installed on top of it, well, a cross-over between Flyme and YunOS, similar to the original.

Now, as you can see, this handset is quite similar to the Meizu Metal in terms of specs. It will have a smaller footprint than its sibling, and the SoC will also be different for some reason, Meizu is probably aiming to make this handset extremely cheap. The MT6753 SoC listed for this handset is quite capable, but it’s inferior to the Helio X10 (MT6795) which was used in the Meizu Metal (and Meizu M2 Note). Meizu is expected to launch this device in the coming weeks, stay tuned for more info, as usual. 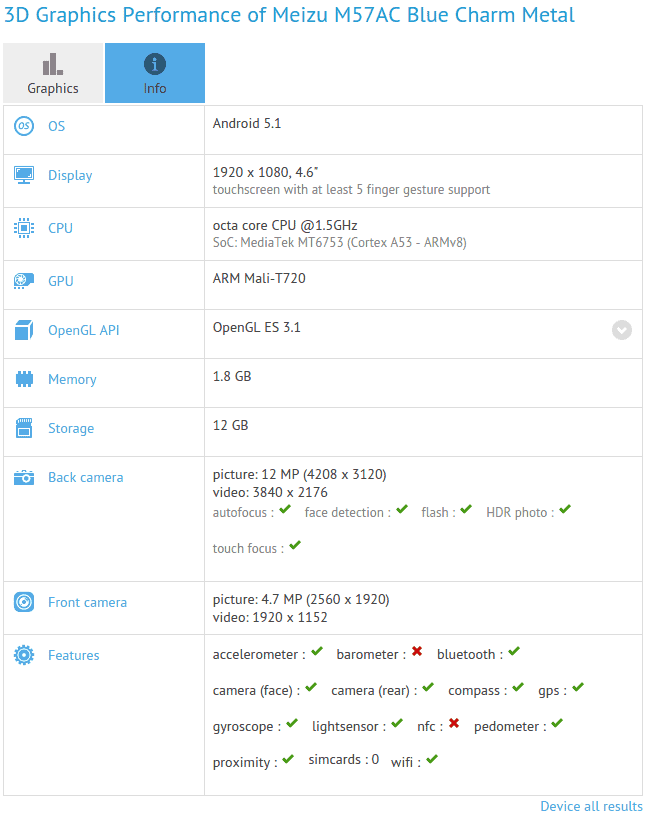