Samsung’s Galaxy S and Note series of devices are best known, for sure, but the company’s mid-range line of devices has become quite popular as well since the company introduced it last year. This Korea-based tech giant has actually unveiled four new Galaxy A devices in the lats couple of weeks, the second-gen Galaxy A3, A5 and A7 devices, along with the first-gen Galaxy A9 device which was announced about a week ago in China. The Galaxy A9 is a rather well-specced phablet, and even though the company unveiled this handset, they did not reveal its pricing. Well, we do have some new info as far as that goes, read on.

Judging by the Galaxy A9’s specifications, build and the fact that this is the highest-end ‘Galaxy A’ device to date, we presumed that this phone won’t be cheap. Well, we were right, at least according to the latest leak from China. According to the leaked listing, the Galaxy A9 will cost 3,199 Yuan ($493), which most user might consider to be too much considering this is a mid-range handset. On the other hand, the Galaxy A9 does have a lot to offer, it’s a very capable phablet, and it also looks really good. The phone sports a metallic frame, and its side bezels are really thin, as you can see in the provided image.

The Galaxy A9 features a 6-inch fullHD (1920 x 1080) Super AMOLED display, 3GB of RAM and 32GB of internal storage (expandable up to 128GB via a microSD card). This handset is fueled by the Snapdragon 652 64-bit octa-core processor along with an Adreno 510 GPU for graphics. The 13-megapixel OIS snapper (f/1.9 aperture) can be found on the back of this phablet, and an 8-megapixel shooter (f/1.9 aperture) is available up front.The non-removable 4,000mAh battery is located on the inside, and this device offers 4G LTE connectivity, fo course. Android 5.1.1 Lollipop comes pre-installed here, while the device measures 161.7 x 80.9 x 7.4mm, and weighs 200 grams. The Galaxy A9 also sports a fingerprint scanner which is built into the physical home button, right below the display. 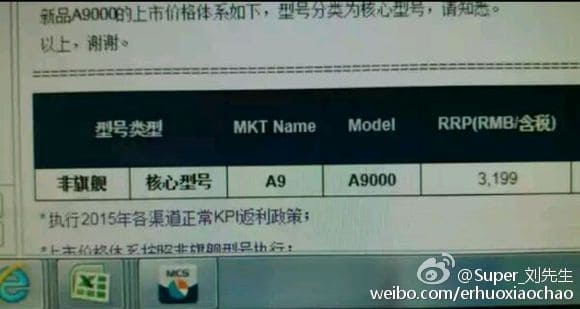