We haven’t heard much from Oppo lately. The company did announce a couple of entry-level and mid-range devices this year, but their upcoming Find 9 handset hasn’t really been leaking all that much. Oppo N3 is still the company’s flagship offering, and that handset was announced back in October 2014, which means it was launched over a year ago at this point. Anyhow, the Oppo N3 sports the auto-rotating electric camera up top, which is something the company’s ‘Find’ series doesn’t have, but according to newly released images and specs, the Oppo Find 9 might be a very interesting device, read on.

New Oppo Find 9 images and specs have surfaced on Weibo. According to the listing, this handset will be fueled by the Snapdragon 820 64-bit quad-core SoC and it will pack a whopping 6GB of RAM on the inside. Now, we do know that this sounds a bit far-fetched, but there you go. The phone will also sport two SIM card slots, and Oppo’s VOOC Flash Charge will also be available here, and so will the Type-C USB port. The phone will ship in Rose Gold, Matte Gold, Obsidian, Sapphire Blue and Emerald color options, according to the tipster. Now, if you take a look at the images down below, you might notice that this smartphone actually resembles the OnePlus 2, which is not that odd actually. The Oppo Find 7 resembled the OnePlus One quite a bit, and these two companies are definitely connected in some way. Oppo is actually OnePlus’ shareholder, and even though OnePlus denied that Oppo Mobiles has anything to do with the company, Oppo Electronics sure does. We’ve also seen some Oppo and OnePlus merger rumors recently, but we’ll see what happens.

Anyhow, the pictured device actually looks really sleek, the phone basically has no bezel on the sides at all, and even though it makes it look rather odd, this is one sleek-looking phone. Unfortunately, we cannot confirm that these renders or spec info are accurate, but you can expect additional leaks to pop up soon, especially if the info is accurate. 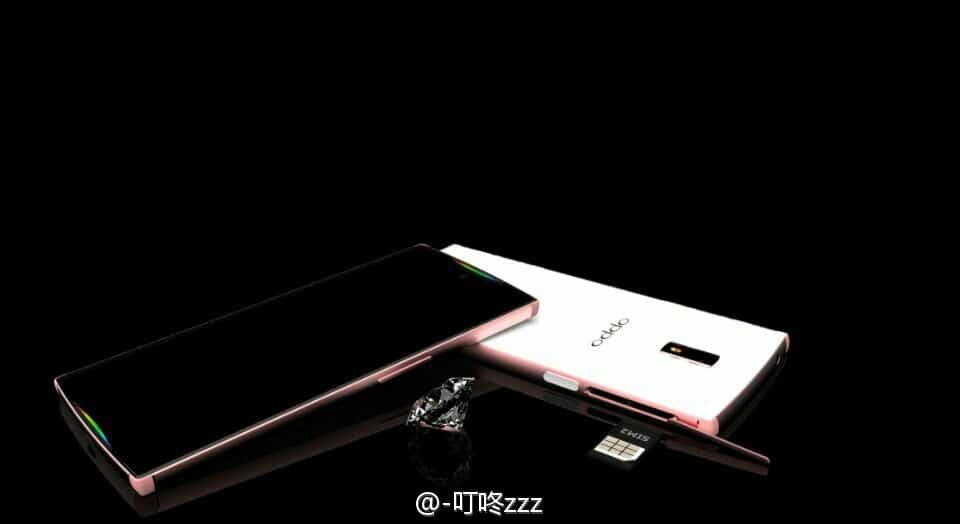