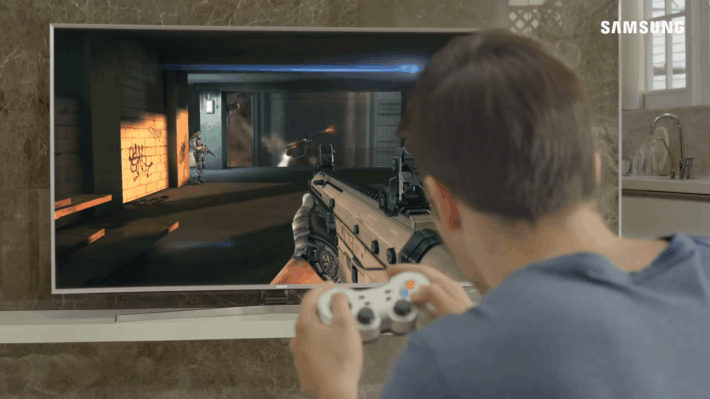 The so-called Smart TVs have existed for a while, they can get connected to the internet and they include some popular apps to stream content. Still, the software on those TVs has never been that good, that’s the reason why set top boxes and other streaming devices exist. Mobile devices are currently used for all kinds of things and gaming is a big part of it, graphics have been getting better and the gameplay uses every sensor to provide new experiences. Since some smartphones have a resolution as high as most TVs (or higher in some cases), it would be good if some titles could be played in the big screen. Samsung has thought of that and the company has just announced that they will bring their new Smart TV GAMES platform to some of their 2016 TV lineup.

Over 400 game titles will be available for streaming and 100 titles will be downloadable, and those will look good thanks to the technology that Samsung uses in their Smart TVs. Some streaming titles include Assassin’s Creed III, Batman: Arkham Origins, and The LEGO Movie Videogame from PlayStationâ„¢Now, additional games will be available from genres such as action, sports, racing, role playing games (RPG), first person shooters (FPS) and board games.

Smart TV GAMES will be available in 43 countries and it’s expected to have over 4.5 million monthly users. The subscription service PlayStation Now will be improved and it will include almost 300 games, including some titles from the PlayStation 3 such as Mortal Kombat, The Last of Us: Left Behind, God of War III, BioShock 2 and Borderlands 2. GameFly, a game streaming service available in 21 countries will get over 100 game titles on the platform. Some of the games that will be available to download include titles such as Revolt3, Deer Hunter and Eternity Warriors 3. “The new Smart TV gaming service is just one feature of a TV that offers all-round entertainment. Our game offering will continue to expand, as Samsung partners with publishers of popular games”, said Youngchan Kim, Vice President of Visual Display Business at Samsung Electronics. Samsung will showcase the new service at CES 2016, the software seems to be getting better and apparently users will get a lot of options to control the elements on screen.