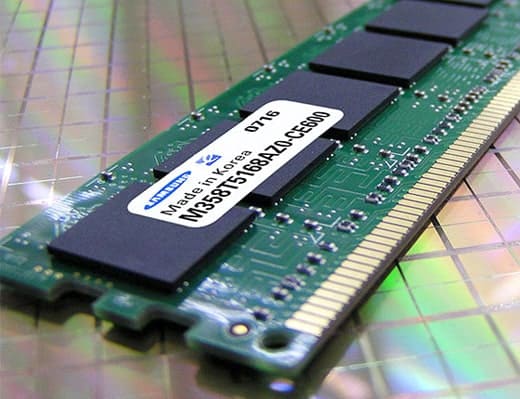 Samsung is no stranger to chip research. From new designs for RAM chips to their own Exynos processors, Samsung’s silicon has seen some serious improvement over the years. This pattern shows no signs of stopping, with Samsung scheduled to begin creating DRAM chips with a new 18 nanometer process, known as 1X-nano. This should result in lower production costs and more profitability as prices for DRAM chip components continue their freefall. Samsung has already finished the design and development of the process and chip and should be able to mass produce them some time in the first quarter of 2016.

Samsung has followed up on their quick adoption of the 20nm process for DRAM chips back in 2014, being one of the first to not only adopt the 18nm process, but finish a design based on it and begin creating chips with that design. Being the first out the gate with 20nm mass production in 2014, they’re looking to keep the pattern going with the quickest possible mass production rollout of the new 18nm process, stretching it into the 2nd quarter of 2016 at the absolute latest.

Competitors SK Hynix and Micron are hot on Samsung’s heels, already beginning to focus on enabling mass production capability for their own 18nm designs. As they’re not quite ready yet, they are unlikely to beat Samsung to the punch, but their designs will likely hit mass production soon afterward.

As an interesting side note, rumors and predictions have been swirling in the tech and business worlds alike that Micron, who stubbornly clung to the 20nm process as their flagship design well into 2015, stands to post a loss. This also means, of course, that they will likely be the last of the trio to hit the market with the new DRAM design in mass production. This comes on the heels of some hard times, with the company’s most recent quarter showing a net profit drop of a staggering 37 percent. Hynix, on the other hand, set records last year with regards to sales and operating profit, with only a slight slump from that record-breaking performance predicted for this year as 20nm DRAM mass production begins to fall by the wayside. Hynix supposedly plans to finish their 18nm design in mid-2016 and roll out mass production by the end of the year.