When it comes to smartphones, Samsung is known to be a company who does not hold back on releasing a variety of devices each year and even a variety of variants of certain devices. A method which regardless of anything, means they do offer choice to consumers and helps the company to shift vast quantities of devices, overall. In fact, this seems to be a method Samsung also employs when it comes to tablets. Although, the market seems to be one that is in decline in general, Samsung seems to do rather well with tablets (compared to others) and again, brings a number of options to the market, from flagship tablets to really big tablets.

A few weeks, ago a report came through detailing that Samsung were planning on releasing updated versions of their more mid-range Galaxy Tab E. At the time though, there were few details available on these updated models with the exception that one will be Wi-Fi enabled and the other will be Wi-Fi + cellular enabled. The first was due to come with the SM-T280 model number and SM-T285 would be reserved for the Wi-Fi + cellular variant. Now some more details have come through, as its seems in the past few days a device with the SM-T280 model number has been spotted being benchmarked on both GFXBench and Geekbench.

According to the new benchmarks, the SM-T280 will come with a 7-inch display which makes use of a 1280 x 800 resolution. Moving to the inside and the SM-T280 comes equipped with 2GB RAM (listed as 1.4GB) and powered by a Quad-core Spreadtrum (SC8830) processor clocking at 1.3 GHz. This is along with an ARM Mali-400 processing the graphics. Cameras will come in the form of what looks to be a 5-megapixel rear camera, which is coupled with a VGA front-facing camera. Storage will likely be at the 8GB level (listed as 4.8GB) and there is no mention of whether the storage will be expandable. There is also no details provided on what type of battery capacity will be on offer, although in terms of the operating system the benchmarks do state Android 5.1.1 (Lollipop) will be in play. Moving briefly over to the Geekbench results and these do fall in line with the same model number, operating system variant and also the processor noted. In terms of their results, the single-core performance comes in at 345 while the multi-core performance comes in at 1063. 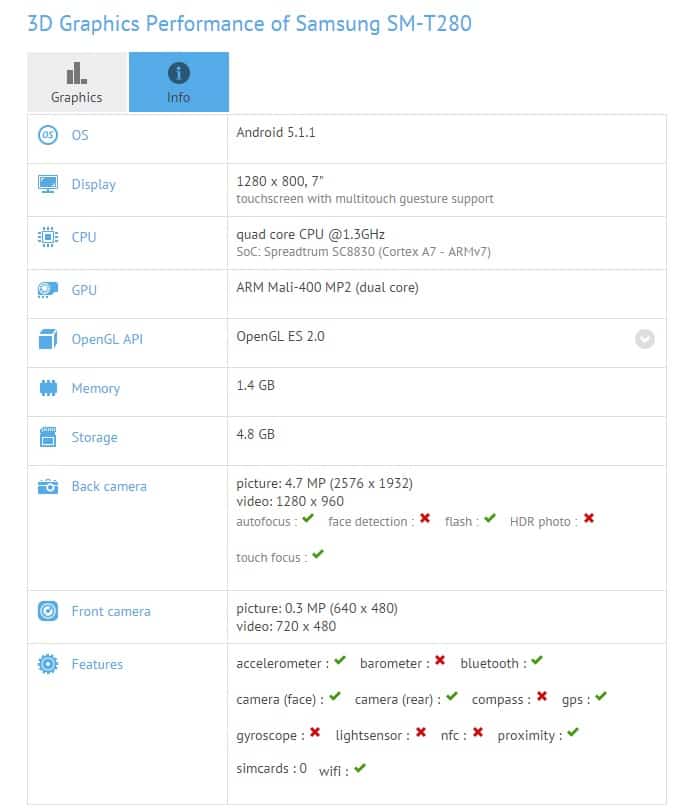