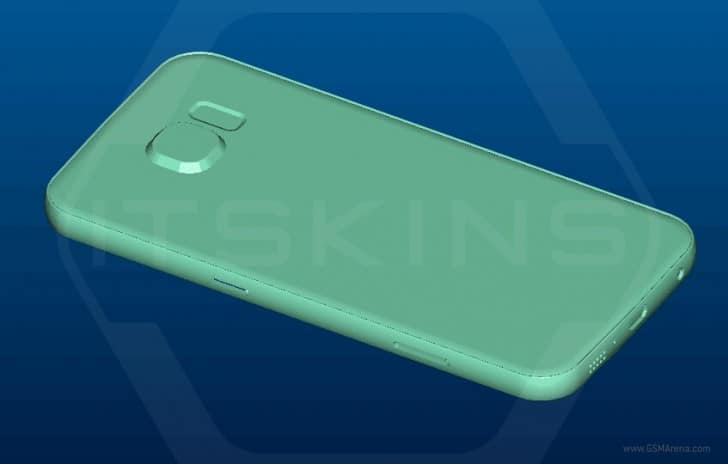 When we start getting renders from accessory makers, you know we're getting close to an announcement. And today, ITSkins have released some renders of their product line for the upcoming Galaxy S7, and Galaxy S7 Plus. Now the Galaxy S7 we've heard plenty of, however the Galaxy S7 Plus we haven't heard as much of. Both of which are expected to be announced at the same time, and rumors are pointing to a January announcement right now. But we're taking that with a grain of salt, until Samsung confirms it.

The renders here show that the Galaxy S7 and Galaxy S7 Plus are going to look pretty similar to the Galaxy S6. Which may not be a bad idea, seeing as everyone loved the way the Galaxy S6 and Galaxy S6 Edge looked, with its glass front and back as well as the aluminum frame. It also looks like the protruding camera is here to stay. Along with the flash and heart rate sensor on the side of the camera. On the front, we see something a bit different. It appears that Samsung might be going with a rectangle button for the home button this time around. We can also see that the SIM card slot has been moved on over to the side of the device, instead of staying at the top, as it was in the Galaxy S6.

When it comes to the dimensions here, one is measuring in at 143.37 x 70.8 x 6.94mm. That is about the same size as the Galaxy S6, so it does look like one will keep that 5.2-inch display, while the Galaxy S7 Plus is measuring at 163.32 x 82.01 x 7.82mm, which is quite a bit bigger and thicker. And seems to confirm earlier rumors of Samsung going with a larger device this year in addition to the Galaxy S. Rumors pointed at it being a 5.8-inch display, and that could quite possibly be true.

As always, it's important to take this with a grain of salt until Samsung makes it official. But smartphone makers do share parts of the design and measurements with accessory makers so they can get their product line ready.