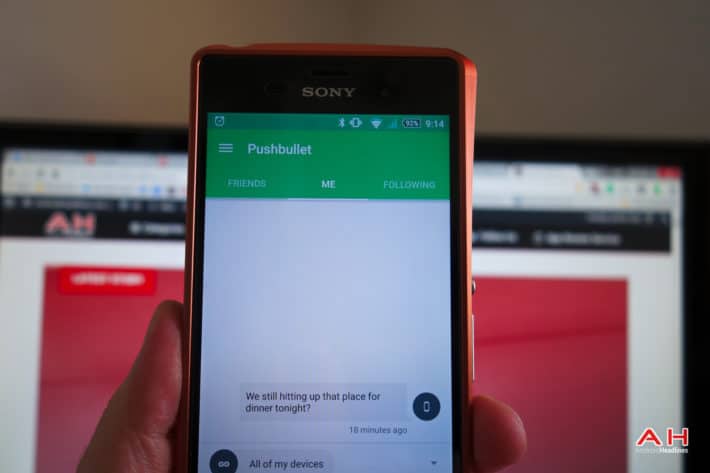 One of which is the ability to do group text messaging now through the app. So now Pushbullet has support for the Chrome extensions, Windows desktop app as well as Pushbullet's website for group texting. The company says that support for Safari, Opera and Firefox are on their way soon. It's also worth noting that to use Group SMS on Android, your device will need to be running Android 5.0 and above. Pushbullet will have a 100 message per month limit for free accounts, however that limit does not go into effect until January.

There is another feature that was added to Pushbullet, or rather an enhancement. Earlier this month, Pushbullet added a remote files feature, which was a great feature to have as you could access files on your desktop at work, from your smartphone at home. However, one feature that a lot of users were looking for was the ability to switch drives in the app. Pushbullet heard everyone's request and has now added that feature into the latest version of the Android app.

Speaking of the latest version of the Android app. It is available now, however it is in a staged roll-out as most updates are. So if you'd like to get the update now, we have the APK available for you to sideload the update onto your smartphone. Pushbullet is a great service, and it gets even better with Pushbullet Pro which is available for $40/year or $4.99/month. It's a bit of a steep price, especially for those that have been using it for free for a while, but it's definitely worth the price with all of the features that the company has been adding as of late. The developers of Pushbullet have to pay their own bills too. Pushbullet has plans for many new features in the new year as well.