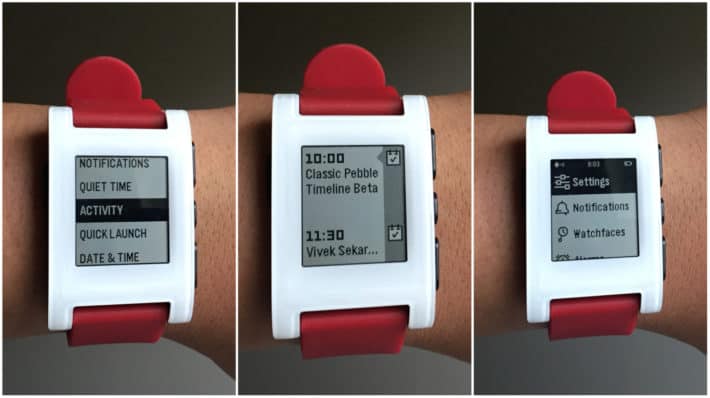 In the midst of all the Android Wear offerings and Samsung's latest smartwatch hit, the Gear S2, Pebble is still going strong and are poised to bring their newest features to classic Pebble smartwatch owners. Earlier this year Pebble unleashed a new interface called Timeline alongside the newly released Pebble Time smartwatch, their latest and greatest in the hardware department, and today they have announced that Pebble Classic owners will finally be getting their taste of that new Timeline interface. In addition, Pebble also states that they are currently looking for Android beta testers and that they're accepting applicants, so if you have a classic Pebble smartwatch, are an Android user, and are interested in checking out the new software, head to the Pebble blog post to request an invite.

With the beta software and when it eventually reaches a final stage and is pushed out to the public, it will bring those on it up to firmware version 3.8. Pebble also states that the beta is open to owners of the Pebble Steel as well as the original Pebble Classic watch, so those with the Steel aren't locked out so long as they're connecting to an Android device. Only a limited number of users will be chosen for the beta test, but the full rollout is supposed to begin sometime later this month so it won't be long before most of if not all users are on the new firmware and taking advantage of the benefits of Pebble's new Timeline UI.

The Timeline setup is all about allowing users to organize the things they find most important so they can more efficiently get things done throughout the day. Pebble was happy to bring out a new product to showcase the way it works, but they also wanted to bring the same experience to older Pebble device users and although they found it to be "one of the most challenging projects they've ever tackled," they also state that it was purely rewarding for them in knowing that they're continuing to support the whole of the Pebble ecosystem. For those who may not have the best idea of what Timeline offers, Pebble has given a quick breakdown of what to look forward to with the interface which can be viewed in the video below.