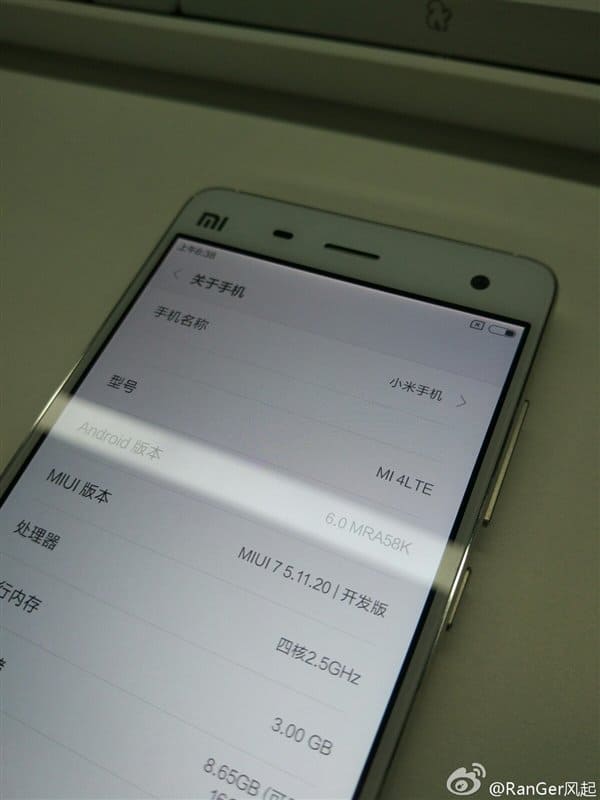 Xiaomi is not exactly one of the first companies to update their devices to the latest version of Android. Xiaomi actually pre-installs their MIUI OS on top of Android, and they've been stuck on 4.4 KitKat for quite a while. The company has released the Android 5.1 Lollipop-based MIUI 7 a couple of months ago, and it seems like Android 6.0 Marshmallow is in their plans for the near future, which are great news for Xiaomi smartphone owners, read on.

This information comes directly from MIUI's operations manager. He decided to share some Android 6.0 Marshmallow details with the public through Weibo, the Chinese social network. According to the post, Xiaomi Mi 4 and Mi Note will be the first Xiaomi-branded handsets to get the Android 6.0 Marshmallow update. The new version of Android will actually ships with MIUI 7 on top of it, the very same OS that came pre-installed on Android Lollipop-powered devices. Xiaomi will, of course, release a new variant of MIUI 7 and you'll be able to find Marshmallow features on there, some of them at least.

Now, MIUI's operations manager did not share any specific details when it comes to this, he didn't talk about the upcoming features, nor did he say when exactly will the two aforementioned devices get the update, but he did say 'really soon'. This indicates that we might see Android 6.0 Marshmallow hit Xiaomi Mi 4 and Mi Note as early as January, or at least Q1 2016. Either way, we'll let you know as soon as more info comes our way. That being said, the Mi 4 seems to be a very popular device still. This is Xiaomi's flagship smartphone for 2014, and the Mi 5 still hasn't been launched by the company, that phone will also arrive in the first quarter of next year, quite probably January.

As you probably already know, Xiaomi has introduced the Redmi Note 3 and Mi Pad 2 recently, and it seems like the company aims to release Windows-powered devices in the future as well, not just Android-powered ones. The Windows-powered Mi Pad 2 will land at the end of this month, and Mi 4 users will be able to install Windows on their devices as well. There's a lot happening over at Xiaomi, stay tuned for updates.