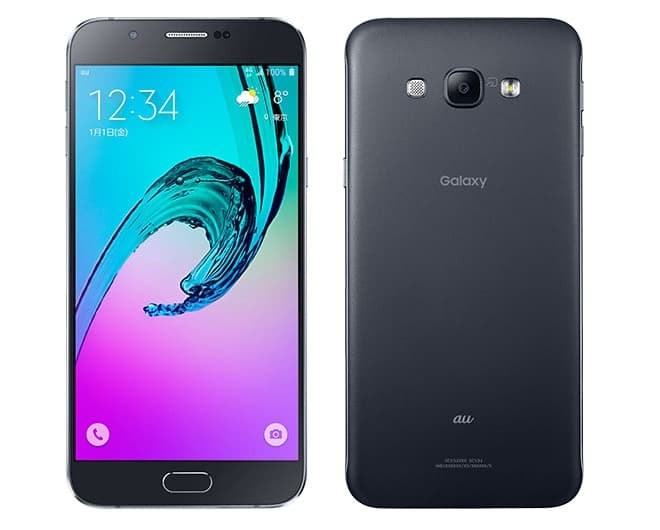 In addition to a number of entry-level and four flagship offerings Samsung has released this year, the company has also unveiled three very solid mid-rangers quite recently. After weeks of leaks and rumors, the company has finally took the wraps off of 2nd-gen Galaxy A3, A5 and A7 handsets. All of these smartphones are made out of metal, and are in a way mid-range variants of the Galaxy S6 handset. The Galaxy S6's design is definitely visible here, which is not a bad things, quite on the contrary. That being said, Samsung has decided to unveil yet another 'Galaxy A' handset, read on.

Samsung has decided to unveil the upgraded variant of the Galaxy A8 in Japan. As you probably already know, the Galaxy A8 was announced back in July, and this is the same handset, but with a different SoC. The original Galaxy A8 is fueled by either the Snapdragon 615 64-bit octa-core processor, or the Exynos 5430, depending on where you purchase the device. This new variant of the device ships with Samsung's Exynos 5433 processor, which is quite different than the Exynos 5430. This SoC actually comes with an ARMv8-A instruction set, compared to the ARMv7 one which is available in the Exynos 5430. The SoC sports four Cortex-A57 cores which are clocked at 1.9GHz, while four Cortex-A53 cores running at 1.3GHz area ls also present here. The more powerful Mali-T760 MP6 GPU which runs at 700MHz is also a part of this package, compared to the Mali-T628 MP6 (clocked at 600MHz) which is included in the original Galaxy A8 smartphone.

As already mentioned, other than the SoC, these two phones are identical. The Galaxy A8 features a 5.7-inch 1080p (1920 x 1080) Super AMOLED display along with 2GB of RAM and 32GB of internal storage. The phone is powered by the Exynos 5433 SoC (new variant), as already mentioned, and a 3,050mAh non-removable battery is also a part of this package. The 16-megapixel camera is located on the back of the Galaxy A8, and a 5-megapixel snapper can be found up front. The phone does sport a fingerprint scanner as well, and you can expand its internal storage via a microSD card if you want. Android 5.1 Lollipop comes pre-installed here with Samsung's TouchWiz UI which is available on top of it. The device measures 158 x 76.8 x 5.9mm, while it weighs 151 grams. The new variant of this phone will be available in Japan in three colors, White, Black and Gold, and we have no idea if it will be available outside of that Asian country.